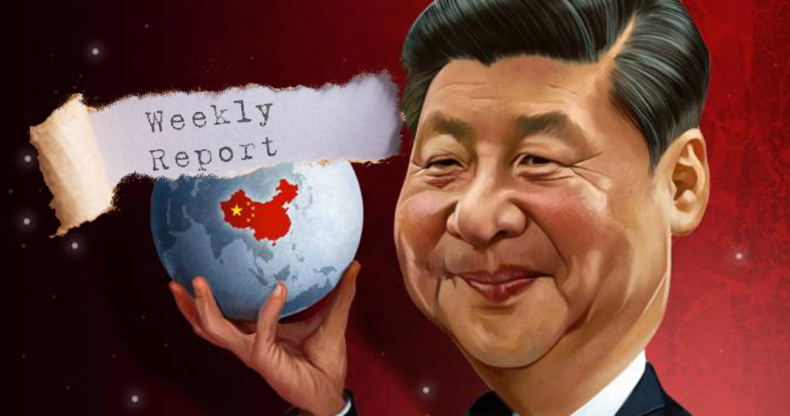 We will get to cybersecurity stocks and how two main drivers, the rise in telecommuting amid the coronavirus and fear of cybercrime, are moving the industry and the stocks in the right direction.

But first: China is out of control.

Trump is right on this. And no, I am not just saying that because he finally decided to wear a mask after six months and nearly 150,000 Americans died from a virus that could have been better contained.

Now, before my Chinese readers (and employer—CapitalWatch.com is Chinese owned and focused) prepare to dismiss my services, at least Google-translate the full article, imperfect as such translation will be, before making any rash decisions.

Do you know who also makes rash decisions? Trump. There, that should save my job for at least another paragraph or two.

I got on this topic after yet another unpleasant evening with a family member, whose hostile brand of wokeness is so impenetrable it renders all conversation impossible; talking to him is like talking to a tweet on a wall. For the very mention of "alleged" Russian attempts to steal data from American and British companies and organizations working on Covid-19 vaccines prompted an extemporaneous lecture about the historical American meddling around the world: "We can't criticize them; we do the same thing."

But first, should we care that Russia steals some data so it can develop its own vaccine? Yes and no. In a perfect world, scientists from all nations would share data to assist in expediting the development of a viable vaccine. But we do not yet have a one-world government, and theft of this kind creates bad incentives for private companies using their own (and their own government's) resources to develop a Covid-19 vaccine in record time.

The pace of the vaccine race is already such that experts worry it could have a countereffect on Americans, many of whom are already stupidly skeptical of vaccines, to begin with. The last thing we want to do is provide an incentive to cut corners. Not only may the vaccine and its first brave volunteers suffer, but the entire vaccine infrastructure in America could be put in peril. More importantly, my stock in Moderna (MRNA) might go down even further.

Every nation that can spy does and we are no exception (just ask Angela Merkel). But there is spying and then there is dedicating a vast amount of resources intent on causing chaos. That's what Russia does; that is Putin's M.O., not ours.

And China? China's M.O. is different. At least that's what we believed.

We believed that China, unlike Russia, does not want to destroy liberal democracies around the world, it just does not want to adopt the liberal model for itself. We believed that China (and maybe this was true before Xi) could be a cruel authoritarian at home but a peaceful, albeit kleptomaniacal, actor on the world stage. These last months have illustrated otherwise.

In the last 60 days, China clashed with India at the border, ended the so-called "golden age" of relations with Britain, and cracked down on Hong Kong. China has upset Japan by sending ships to islands disputedly claimed by both nations. The Chinese are even fighting with Australia. Yes, Australia. China imposed 80% tariffs on the country after it pushed for an inquiry into Covid-19.

It will take a lot more than some free shipments of surgical masks and a couple of weird billboards in Sarajevo to convince the world that China, at least under Xi, is ready for global leadership. The nation has squandered any goodwill during the Covid-19 crisis in the way that America squandered any goodwill after 9/11. Trump, for how bad he is in every imaginable way, will be an afterthought worldwide if he is beaten in November; China's recent bullying blunders make the rapid restoration of withering alliances seem not only possible but potentially pretty easy.

So, what does America do? Well, first, silly stuff like calling Covid-19 the "China virus" doesn't do any good. That said, the overly woke should know that the early use of the phrase "Wuhan Virus" was not inherently racist. Ever been to Lyme, Connecticut? Well, that's where Lyme disease originated, and no one considers this to be racist towards Connecticuters. Nor does anyone get into a fuss about the West Nile Virus, Zika, Rocky Mountain Spotted Fever, or German Measles—to name a few of many illnesses named after their place of origination. Also, the Han Chinese are not a minority; just ask an Uyghur.

Now, I am not advocating Trump to use that term or any other considered pejorative. To throw the language of Trump apologists back in their faces: "It's not what he says, but what he means."

Well, what he means to do is stigmatize China and the Chinese people and deflect from his own failings. What he means is that China is responsible for the fact that we are the most hard-hit nation in the West. That falls squarely on our tired shoulders.

But should we castigate China for obfuscating the truth of the virus' ferocity and the level of its containment? Absolutely. Because do you really think Britain or Germany or the U.S would have done the same if the situation were reversed?

I am not moralizing for moralizing's sake. But shame can work, just not when uttered from the mouth of the most shameful of persons. Shame can serve to bring the world together to contain our Asian adversary long-term.

Rhetoric in the service of Realpolitik, not "Tweetpolitik."

While a cold war with China over tech and global economic dominance is inevitable, but this cold war need not run as hot as the last one (or the current one with Russia, for that matter, which puts tens of millions of people in danger of being vaporized every single day).

Back to Beijing. Is the question facing the U.S. as simple as China's Ambassador to the U.S. Cui Tiankai says it is?

To answer your question, Mr. Cui, let me respond with a question of my own.

If by "different culture" you mean wet markets (yes, I went there) that repeatedly cause worldwide pandemics and further endanger endangered species; and if by "political system" you mean the kind that covers up a deadly pandemic; and if by "economic system" you mean intellectual property theft on a massive scale, then no, we, the rest of the world, do not have to live with it.

But we do have to live with China. It is too big to fail. We should shame, but shame smartly—as part of a long-term stategy. In the past, too much time and energy wasted in half-hearted efforts to push back on China for internal human rights abuses. No one in the world believed us, anyhow.

The stick or the carrot? Our strategy with China for decades has been to proffer a twig with a carrot stuck to it in one hand and an iPhone in the other only to realize that we sold both the stick and the carrot back to Beijing. As for our iPhones, now they are used against us, our data being stolen and sent to China as we dance around mindlessly in TikTok videos, our cities burning in the background.

Closing a Houston consulate is not the answer, nor is punishing international students. But Trump's impulses are right. As are the impulses of many of the Democrats, many of whom have been awakened from their wokeness regarding China. Even left-leaning news sources like The Guardian get it. In a recent article, The Guardian quoted President Xi who said this in a rare meeting with business leaders this week in China.

"While the green hills last, there will be wood to burn," Xi said. "If we maintain our strategy … we will find opportunity in crisis and turbulence. The Chinese people will surely prevail over all difficulties and challenges ahead."

Xi Wiz. How do you spell "WTF?" in Mandarin?

For all its long-term thinking, China has completely blown a golden opportunity to lead, an opportunity Trump offered up on silver platter through his own "America First" isolationist posture. Let us survive Trump's missteps long enough to take advantage of Xi's. And let us invest in the most important defense we have against its thieving designs: Cybersecurity.

Stocking Up on Cybersecurity Equities

According to Global Market Insights, the cybersecurity industry will grow at an average of 12% per year. The sector could reach $400 billion by 2026. The stay-at-home economy has rapidly pushed development in this space; fears over Chinese and Russian cybercriminals scouring for our data will only serve to push these stocks even broadly representing this space higher.

Okta (Nasdaq: Okta) has been on a tear this year, gaining 73.6% in the first half. Fiscal Q1 revenue surged 46% year over year to $182.9 million driven by a 48% increase in subscription revenue. The stock has taken a recent dip. I would monitor this stock and expect to pounce on it before the next quarterly in late August.

Zscaler (Nyse: ZS) is another hot stock in the cloud-based cybersecurity space.  Management raised its full year fiscal revenue outlook to between 39% to 40%, or $422 million to $424 million. However, a recent partnership between cybersecurity stock CrowdStrike Holdings (Nasdaq: CRWD) and Zscaler competitor and privately-held Netskope might render its own partnership with CrowdStrike impotent.

In an unusual multiway partnership, Crowdstrike Okta (Nasdaq: OKTA) Proofpoint (Nasdaq: PFPT) and Netskope are working together to protect workspaces, at home and in the office, from cyber threats. All these four players are worth looking at long-term. You can add Cisco and Palo Alto Networks as well, the latter of which just beat the former in earnings. Despite being the runner-up, Cisco is undervalued and a buy.  But I like Fortinet (Nasdaq: FTNT) the best. While it took the number three spot with about $577 million in network security Q1 revenue during Q1, Fortinet's stock is up only 25%, an impressive incline but not as compared to other stocks in the space. Fortinet is also moving to the cloud where, in a world of millions of hand-held devices, the future of cybersecurity lies (there's more money in securing iPhones than Fort Knox.)

That said, the Chinese love gold, so let's make sure that perimeter is also secure.

A recent acquisition of privately held OPAQ is part and parcel of this Fortinet's move towards the cloudy heavens. The fact that the amount was undisclosed should not worry investors. The company boasted a balance sheet with $1.57 billion in cash and investments with no debt as of late March.

As for my own balance sheet, let's just say I'm not quite ready to disclose the performance of my Robinhood.com foray into options trading as promised last week.

I can say, however, that I do not expect a hacker from China—or anywhere else— to break into my account and follow my trades.