The U.S.-China company took blows from short-sellers and foreign investment regulators since it became public less than a year ago. Now, its CEO and co-founder are forced to resign in what TuSimple called a "planned" move. 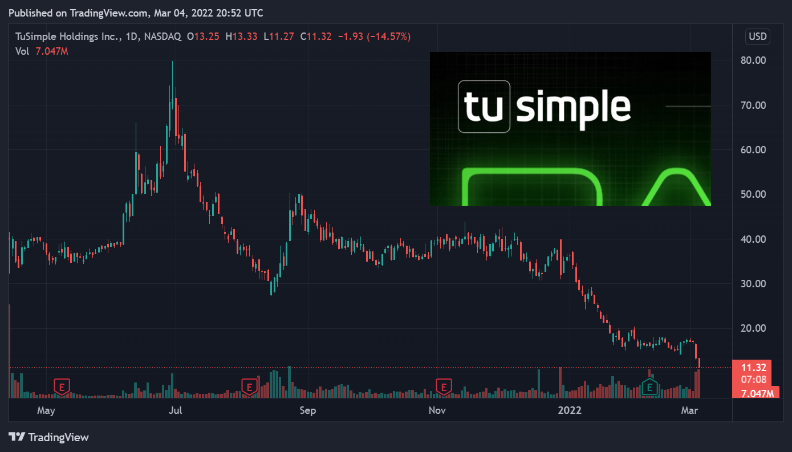 (CapitalWatch, March 4, New York) Shares in TuSimple Holdings Inc. (Nasdaq: TSP) continued to plunge the day after the company announced the replacement of both its chairman and CEO, down an additional 13% as of Friday afternoon.

On Thursday, the California-based company with Chinese roots announced that its co-founder and chief technology officer, Xiaodi Hou, is assuming the roles of CEO, president, and chairman. The company said the shift was "part of a planned executive succession." The former CEO and president, Cheng Lu, will remain with TuSimple for one year as an advisor, according to the report.

The statement included quotes full of gratitude for the resigning members and optimism for TuSimple's future. However, the market took the news badly – the sell-off tanked the shares in TSP by more than 20% on Thursday, and Friday brought no recovery. Shares in TuSimple traded at $11.48 apiece intraday, down 68% year-to-date overall.

Markets generally declined on Friday: the S&P 500 was down 39 points, the Nasdaq Composite slid 1.4%, the Dow lost 233 points, and the Nasdaq Golden Dragon China Index declined 4.7% to 7,231.51. In Hong Kong, the HSI ended 2.5% lower. Russia's MOEX remained closed on Friday in the longest shutdown as Vladimir Putin's "special military operation" in Ukraine passed the one-week mark.

TuSimple became U.S.-listed less than a year ago, and it has already hit some obstacles on the road since. Before 2022, the stock in TuSimple wavered near the $40-mark and briefly peaked as high as $79.84 per share in July. The company celebrated its $1.35 billion IPO in mid-April – since then, it has "successfully achieved all of our key milestones," as the resigning chairman Mo Chen said.

Among them was the 80-mile, 80-minute run of TuSimple's autonomous semi-truck from Tucson, Arizona, to Phoenix in December. The company proudly called it "the world's first fully autonomous semi-truck run on open public roads without a human in the vehicle and without human intervention."

Yet the company also faced short-seller allegations just months after its IPO. In August 2021, Grizzly Research LLC compared TuSimple to the scandal-ridden Nikola Corp. (Nasdaq: NKLA) and pointed to some shared investors who have been sued for negligence. Grizzly also brought up the history of failed startups and bankruptcies by the aforementioned co-founders of TuSimple, Mo Chen and Xiaodi Hou. Lastly, Grizzly questioned TuSimple's reported pre-orders and revenue forecast.

Further, soon after the IPO, TuSimple fell under an investigation by the U.S. authority on foreign investment, which scrutinized the company's ties to China. Among TuSimple's main shareholders has been an affiliate of the Chinese internet giant Sina Corp. Last week, TuSimple said in its filings with the U.S. SEC that the probe was concluded.

The settlement terms involved the resignations of Cheng Lu and Mo Chen. In addition, two board members who came from Sina will resign later this year. Further, the Sina-connected shareholder will not appoint new directors and will not increase its stake in TuSimple, as Jim Mullen, TuSimple's chief administrative/legal officer, said in an interview earlier.

As quoted by Bloomberg, Mullen said, "We fully understand the sensitivity of artificial intelligence and how it relates to the geopolitical atmosphere and we will do everything we need to do to be in compliance." Mullen also said that TuSimple was not sharing its technology with the China team. The U.S. committee seemed to still have some concerns in that regard, however.

On a side note, Cheng Lu, who studied at Harvard and joined the company in 2018, will receive an annual salary of $450,000 for the year he stays on as an advisor to the CEO of TuSimple until March 2023, according to the filings.