A year ago, this Chinese e-learning provider fooled many a big investor in the midst of Beijing's utter elimination of the nation's tutoring market.
Anna Vod
Jun. 02, 2022 19:55 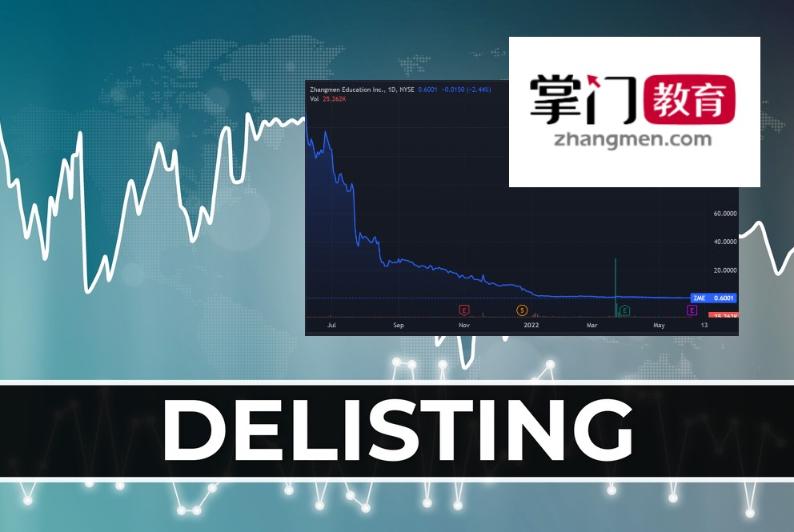 ZME stock was suspended by the New York Stock Exchange Thursday after its close at 60 cents per share the day before. This occurred without any official notice from Zhangmen, while the company said in a press release on April 15 that it was "considering its options to regain compliance with the NYSE continued listing standards."

Now, it appears the NYSE backpedaled on the 90-day window and "has determined to commence proceedings to delist" the ADSs of Zhangmen, as it wrote in today's statement.

Unless Zhangmen appeals, its trading run on the NYSE is over. To think of it, just a year ago in early June, the Chinese company celebrated its $41.7 million listing on Wall Street. At the time, its stock was priced at $11.50 per American depositary share.

While significantly downsized from the company's initial target, the IPO looked promising to even the big banks. Morgan Stanley & Co. LLC, Credit Suisse Securities (USA) LLC, Citigroup Global Markets Inc., CICC Hong Kong Securities Ltd., and Macquarie Capital (USA) Inc. were the underwriters, while SoftBank Group, an existing shareholder in Zhangmen, signed up for 12% of the IPO offering. Warburg Pincus and China Renaissance Holdings were also backers of the company at the time, which no doubt raised its standing in the eyes of the investors.

In an unfortunate turn, the year 2021 proved to be the last for many a Chinese private tutoring provider. Beijing had issued a slew of new laws forbidding foreign investment, limiting for-profit operations, and slashing hours allowed for afterschool tutoring, crippling the K-9 education sector.

Not to mention the related stocks. Even the education giants New Oriental Education & Technology Group Inc. (NYSE: EDU; HKEX: 9901) and TAL Education Group (NYSE: TAL), the two leaders in the space, watched their business empires shatter and their market caps reduce by more than 90%. The companies were forced to restructure, with some choosing to abandon the segment, while others refocused on non-compulsory courses like PE.

And it was only natural that the smaller companies, Zhangmen included, faced a complete wipeout. Some, like Hailiang Education Group Inc. (Nasdaq: HLG), turned to going private; others, like Rise Education Cayman Ltd. (Nasdaq: REDU), merged with firms in unrelated industries and are undergoing a makeover while keeping their listing status. Many of these have become penny stocks.

As to Zhangmen, the company now faces lawsuits in the U.S. Among a dozen or so shareholders' rights litigators, The Schall Law Firm is pursuing Zhangmen for alleged fraud at the time of its IPO.

As the firm wrote in an earlier statement, "Zhangmen was the subject of the Chinese government's largescale reform of the private education market which include prohibitions on profit-making and raising capital. The known risks and uncertainties were likely to have a material negative impact on the Company's future prospects. Based on these facts, the Company's public statements and IPO documents were false and materially misleading throughout the IPO period. When the market learned the truth about Zhangmen, investors suffered damages."