Despite another hawkish FOMC meeting, gold rose again. Why? Because, as suggested by Powell, the pace of tightening is going to slow down.
Arkadiusz Sieron
Jul. 28, 2022 15:16 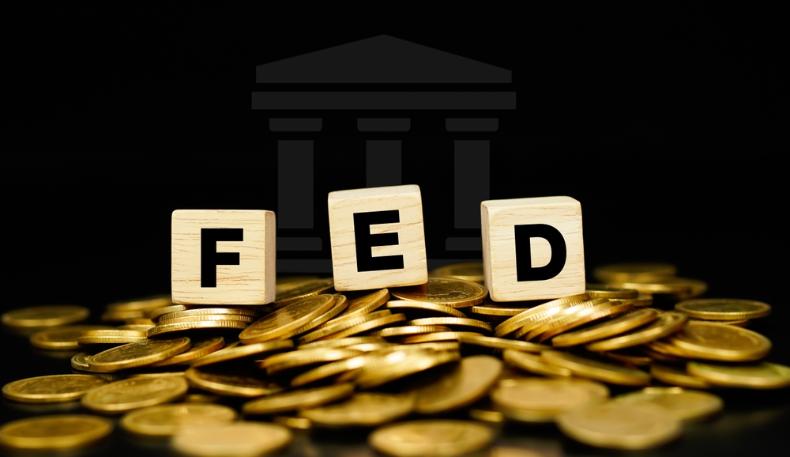 The July FOMC meeting produced another exceptionally hawkish result. The US central bank raised the federal funds rate from 1.5-1.75% to 2.25-2.5%. It was the second 75-basis point hike in a row!

The Committee seeks to achieve maximum employment and inflation at the rate of 2 percent over the longer run. In support of these goals, the Committee decided to raise the target range for the federal funds rate to 2-1/4 to 2-1/2 percent and anticipates that ongoing increases in the target range will be appropriate. 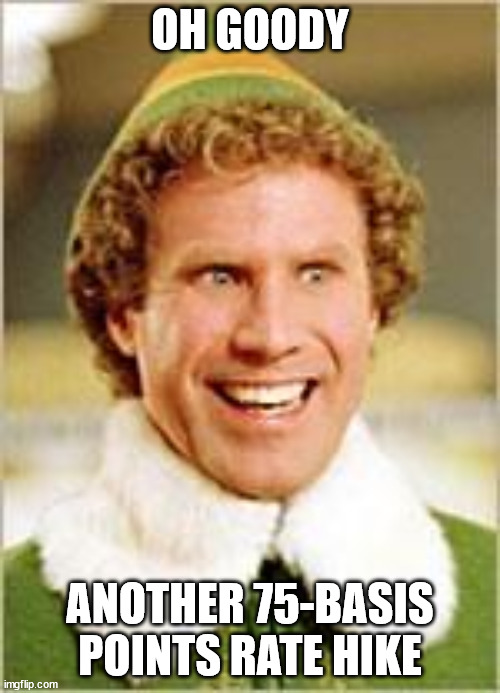 This time, the hike was unanimous, which indicates that support for aggressive tightening has strengthened within the FOMC. Indeed, the current tightening cycle is much steeper than the two previous ones, in which the Fed usually raised interest rates in 25-basis point moves, as the chart below shows. 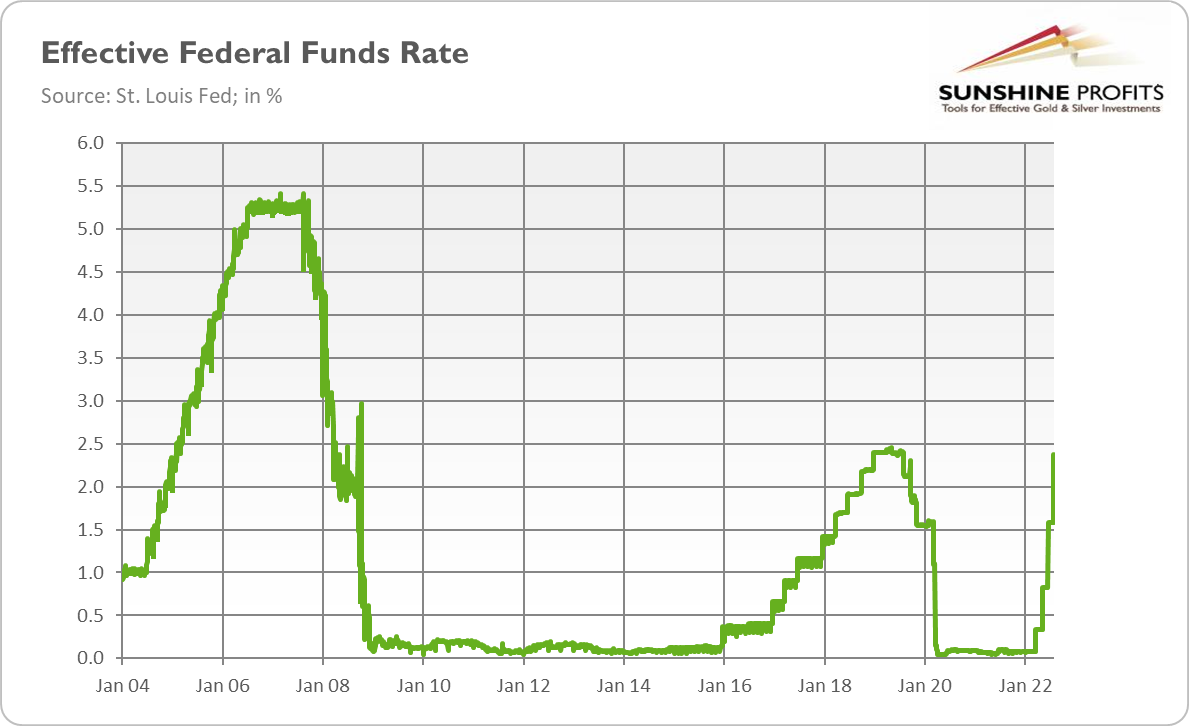 However, the hawkish stance is not particularly surprising, given that the inflation rate is above 9% while the unemployment rate remains low. Thus, the hike was widely expected by the traders, although some of them bet on a 100-basis point move.

Besides another 75-basis point move, the July monetary policy statement wasn't too interesting. The only important change compared to June was that the Fed admitted that "recent indicators of spending and production have softened." Indeed, today's first release of the GDP data for the second quarter of 2022 is likely to be very weak. The US central bank also removed the following sentence about Chinese lockdowns: "In addition, COVID-related lockdowns in China are likely to exacerbate supply chain disruptions."

The FOMC meeting was followed by Powell's press conference. He reiterated a few times how the Fed is committed to restoring price stability and announced that another big interest rate hike could be appropriate. Although Powell didn't specify the next move, he didn't exclude another 75-basis point move:

"We anticipate that ongoing increases in the target range for the federal funds rate will be appropriate; the pace of those increases will continue to depend on the incoming data and the evolving outlook for the economy. Today's increase in the target range is the second 75 basis point increase in as many meetings. While another unusually large increase could be appropriate at our next meeting, that is a decision that will depend on the data we get between now and then. We will continue to make our decisions meeting by meeting and communicate our thinking as clearly as possible."

However, my reading is that Powell sent a dovish signal, suggesting that the pace of hikes could slow down in the near future:

"As the stance of monetary policy tightens further, it will likely become appropriate to slow the pace of increases while we assess how our cumulative policy adjustments are affecting the economy and inflation."

Hence, Powell would feel more comfortable with a 50-basis point move rather than with the 75-basis point one for the third time in a row, especially if inflation moderates somewhat. As he said:

Now that we're at neutral, as the process goes on, at some point, it will be appropriate to slow down. And we haven't made a decision when that point is, but intuitively that makes sense. We've been front-end loading these very large rate increases. Now we're getting closer to where we need to.

What does it all mean for the gold market? Well, the price of gold increased yesterday from about $1,715-1,720 to about $1,735, as the chart below shows, and it continued the upward trend today in the morning. 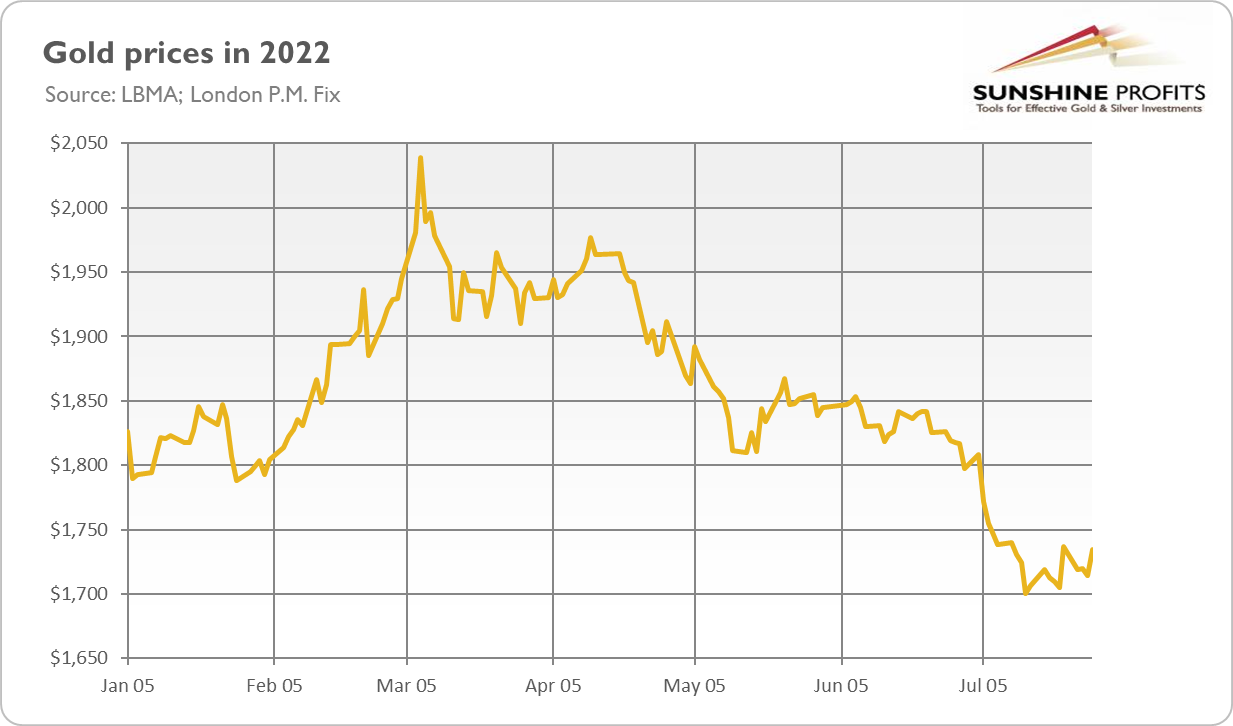 Why did gold prices rise despite the hawkish FOMC meeting? The likely reason is that the Fed stuck to a 75-basis point hike and didn't go more aggressively with the 100-basis point increase like the Bank of Canada did.

Another factor is that the federal funds rate is getting closer to the neutral rate, so the pace of further hikes is going to slow down. It means that we are also approaching the peak in the interest rates or even a reverse in the Fed's stance. Indeed, investors believe that the Fed will raise the federal funds rate by 50 basis points in September, followed by two 25-basis point moves in November and December. They also expect the FOMC to cut interest rates in early 2023, according to the market probability tracker compiled by the Atlanta Fed.

Hence, we are finally noticing dovish light in the dark and hawkish night of the Fed. In this light, gold could shine.