Gold Likes Recessions - Could High Interest Rates Lead to One?

We live in uncertain times, but one thing is (almost) certain: the Fed's tightening cycle will be followed by an economic slowdown – if not worse.
Arkadiusz Sieron
Mar. 11, 2022 22:36 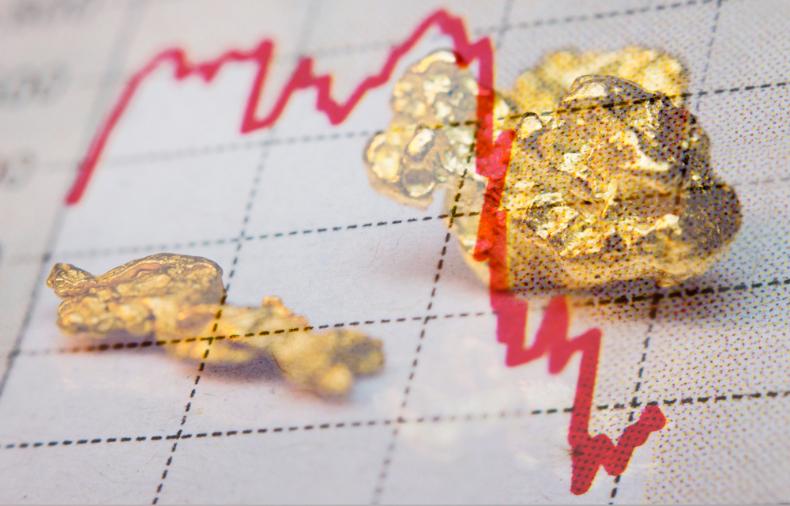 (Sunshine Profits, March 11) There are many regularities in nature. After winter comes spring. After night comes day. After the Fed's tightening cycle comes a recession. This month, the Fed will probably end quantitative easing and lift the federal funds rate. Will it trigger the next economic crisis?

It's, of course, more nuanced, but the basic mechanism remains quite simple. Cuts in interest rates, maintaining them at very low levels for a prolonged time, and asset purchases – in other words, easy monetary policy and cheap money – lead to excessive risk-taking, investors' complacency, periods of booms, and price bubbles. On the contrary, interest rate hikes and withdrawal of liquidity from the markets – i.e., tightening of monetary policy – tend to trigger economic busts, bursts of asset bubbles, and recessions. This happens because the amount of risk, debt, and bad investments becomes simply too high.

Historians lie, but history – never does. The chart below clearly confirms the relationship between the Fed's tightening cycle and the state of the US economy. As one can see, generally, all recessions were preceded by interest rate hikes. For instance, in 1999-2000, the Fed lifted the interest rates by 175 basis points, causing the burst of the dot-com bubble. Another example: in the period between 2004 and 2006, the US central bank raised rates by 425 basis points, which led to the burst of the housing bubble and the Great Recession. 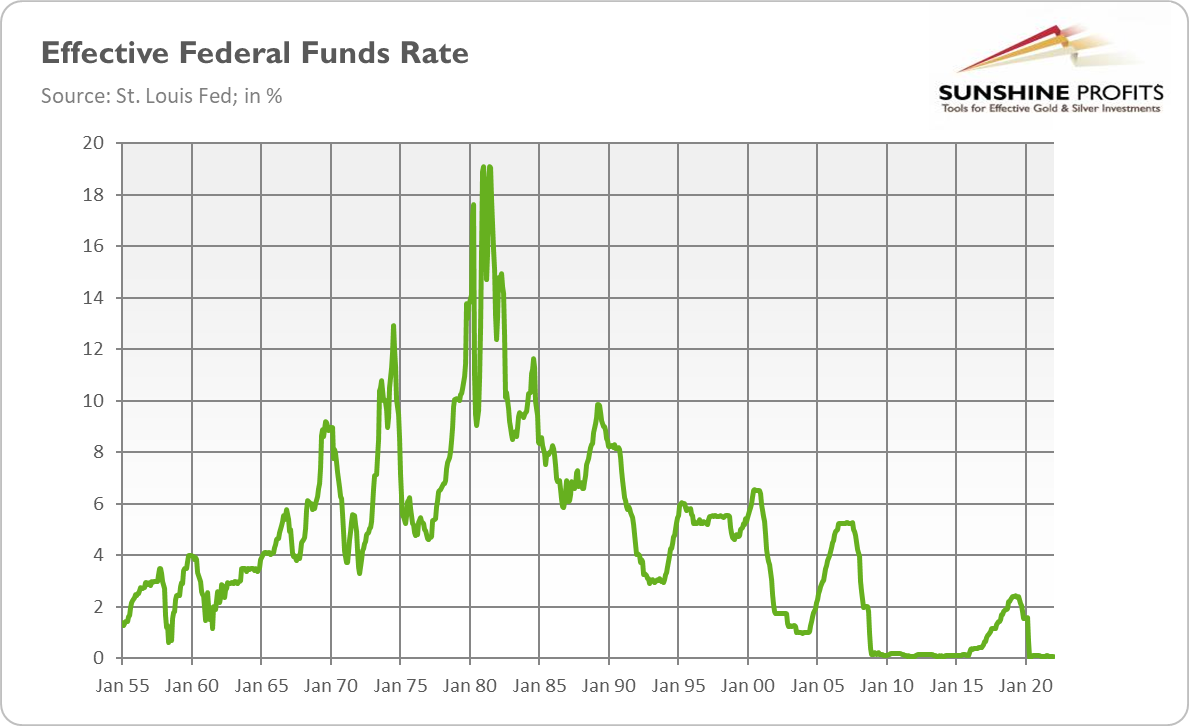 One could argue that the 2020 economic plunge was caused not by US monetary policy but by the pandemic. However, the yield curve inverted in 2019 and the repo crisis forced the Fed to cut interest rates. Thus, the recession would probably have occurred anyway, although without the Great Lockdown, it wouldn't be so deep.

However, not all tightening cycles lead to recessions. For example, interest rate hikes in the first half of the 1960s, 1983-1984, or 1994-1995 didn't cause economic slumps. Hence, a soft landing is theoretically possible, although it has previously proved hard to achieve. The last three cases of monetary policy tightening did lead to economic havoc.

It goes without saying that high inflation won't help the Fed engineer a soft landing. The key problem here is that the US central bank is between an inflationary rock and a hard landing. The Fed has to fight inflation, but it would require aggressive hikes that could slow down the economy or even trigger a recession. Another issue is that high inflation wreaks havoc on its own. Thus, even if untamed, it would lead to a recession anyway, putting the economy into stagflation. Please take a look at the chart below, which shows the history of US inflation. 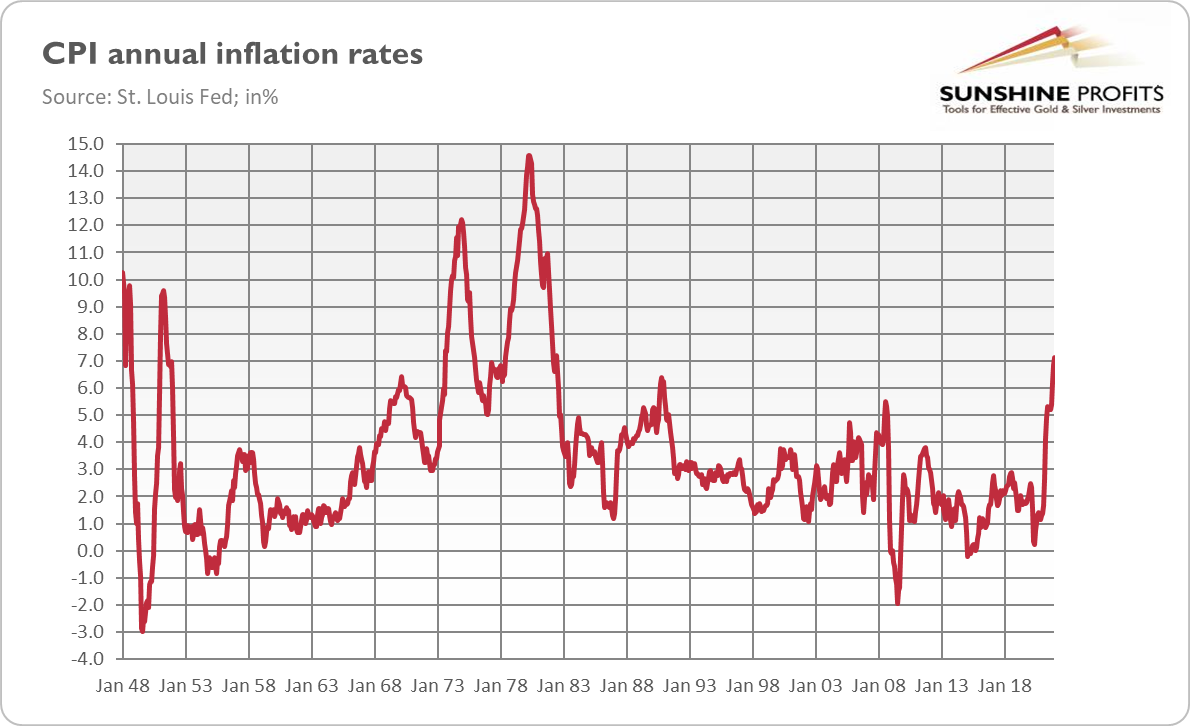 As one can see, each time the CPI annul rate peaked above 5%, it was either accompanied by or followed by a recession. The last such case was in 2008 during the global financial crisis, but the same happened in 1990, 1980, 1974, and 1970. It doesn't bode well for the upcoming years.

Some analysts argue that we are not experiencing a normal business cycle right now. In this view, the recovery from a pandemic crisis is rather similar to the postwar demobilization, so high inflation doesn't necessarily imply overheating of the economy and could subsidy without an immediate recession. Of course, supply shortages and pent-up demand contributed to the current inflationary episode, but we shouldn't forget about the role of the money supply. Given its surge, the Fed has to tighten monetary policy to curb inflation. However, this is exactly what can trigger a recession, given the high indebtedness and Wall Street's addiction to cheap liquidity.

What does it mean for the gold market? Well, the possibility that the Fed's tightening cycle will lead to a recession is good news for the yellow metal, which shines the most during economic crises. Actually, recent gold's resilience to rising bond yields may be explained by demand for gold as a hedge against the Fed's mistake or failure to engineer a soft landing.

Another bullish implication is that the Fed will have to ease its stance at some point in time when the hikes in interest rates bring an economic slowdown or stock market turbulence. If history teaches us anything, it is that the Fed always chickens out and ends up less hawkish than it promised. In other words, the US central bank cares much more about Wall Street than it's ready to admit and probably much more than it cares about inflation.

Having said that, the recession won't start the next day after the rate liftoff. Economic indicators don't signal an economic slump. The yield curve has been flattening, but it's comfortably above negative territory. I know that the pandemic has condensed the last recession and economic rebound, but I don't expect it anytime soon (at least rather not in 2022). It implies that gold will have to live this year without the support of the recession or strong expectations of it.

Thank you for reading today's free analysis. We hope you enjoyed it. If so, we would like to invite you to sign up for our free gold newsletter. Once you sign up, you'll also get 7-day no-obligation trial of all our premium gold services, including our Gold & Silver Trading Alerts. Sign up today!

The opinions expressed by contributing analysts do not reflect the position of CapitalWatch or its journalists. The analyst may or may not have a business relationship with any company whose stock is mentioned in this article. Information provided is for educational purposes only, may be incomplete or out of date, and does not constitute financial, legal, or investment advice.