Didi's Stock Travels Up, Down, and Sideways on First Day of Trading

China's largest ride-hailing company Didi Chuxing (NYSE: DIDI) started its first day of public trading on Wednesday. After a volatile and heavy trading session, it closed at $14.14, or 1% higher than the modest IPO price of $14. At its closing price, the company ended the day with a market value of $68 billion, 30% smaller than its American counterpart, Uber Technologies Inc ($95 billion), but more than three times larger than Lyft Inc ($20 billion).

Widely expected to be one of the largest IPOs this year, Didi opened at $16.04 and quickly spiked to $18.00 within the first minute of trading, rising 30% higher than its IPO price. From the first-minute peak, however, the ride-hailing stock traveled downwards, dipping to $14.10 around 2:30 pm, nearing its offering price. Although Didi left a long red bar on the daily chart, it did fare better than either Uber or Lyft on their opening day, both of which traded lower than their offering price.

Many headwinds contributed to Didi Global's underwhelming performance in the U.S. market. The enthusiasm and trust among American investors toward Chinese companies listed on U.S. bourses has not rebounded since it bottomed during President Trump's tenure. In addition to the continually souring U.S.-China relationship, the ongoing pandemic has also clouded the company's growth potential.

Some financial experts, however, see a promising company in Didi that is drastically different from some of its Chinese peers. Jim Cramer, the outspoken host of CNBC's Mad Money recommended Didi to his viewers after the market close, "I would try to get as many shares as I can." 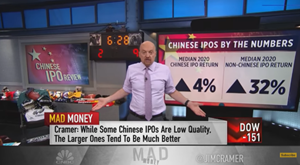 Crame's logic is simple: Didi is so big and big Chinese companies tend to behave and operate much more professionally. Chinese IPO giants, Alibaba (BABA) or Baidu (BIDU) are two such examples.

Founded in 2012 by Chinese entrepreneur Cheng Wei, who recently turned 38 years old,  Didi's debut in the New York Stock Exchange made a long list of investors happy. Some of these investors include  SoftBank's Vision Fund which owns 21.5% of the company; San Francisco-based Uber, which owns a 12.8% stake in Didi; and the founder and CEO Cheng Wei, whose 7% stake in the firm made him a multi-billionaire overnight. Other major shareholders include Tencent and Apple (Nasdaq: AAPL), the latter of which invested $1 billion in Didi back in 2016.

In its IPO prospectus, Didi stated that it has 493 million annual active riders, and 41 million average daily transactions. In the first quarter of 2021, Didi reported a slight profit of $95 million on revenue of $6.44 billion. It is worth noting, however, that some of the company's profitability in Q1 can be credited to gains on investments related to spin-offs and divestments,