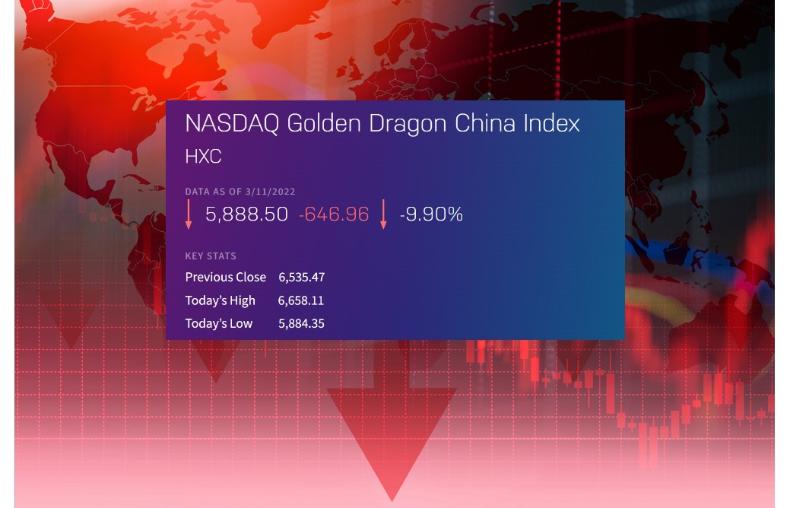 In a March 10 statement, Yum China Holdings Inc. (NYSE: YUMC; HKEX: 9987), which operates Pizza Hut, KFC, and Taco Bell chains in China, said the U.S. Securities and Exchange Commission had identified it for an audit review. Should Yum China fail to provide access to its books for inspection by the U.S. Public Company Accounting Oversight Board (PCAOB), YUMC shares will be delisted from the New York Stock Exchange in early 2024.

Pressure From Both Sides

The move by the SEC was in line with the Holding Foreign Companies Accountable Act (HFCAA) signed into law by former President Donald Trump and enacted by the SEC last year. The Senate had also passed to shorten the time for companies to come into compliance from three years to two; though this has not been signed into law.

In late 2021, the SEC had identified 273 companies whose auditing it has been unable to inspect. Now, the first five companies – each one a major stock that's been U.S.-listed for five years or longer – went into the regulatory spotlight. And as the countdown for delisting began, other Chinese stocks were dragged lower along.

The HFCAA, which was implemented after the 2020 fraud scandal of Luckin Coffee (OTC: LKNCY), goes against Beijing's policy of not taking auditing documents overseas. This has been a major cause of debate between the U.S. and China after Wall Street got burned repeatedly over the Chinese firms' lack of transparency while Beijing, on its side, has pushed to keep its data safe.

Resolution in the Works?

Some market experts gave optimistic outlooks on the discussions between the two sides, considering both Wall Street and China are interested in continued investment opportunities. Thus, Frank Gong, former Chief China Economist and chairman of China Investment Banking at JPMorgan Securities (Asia Pacific) Ltd. and now a shareholder of multinational electric vehicle maker Iconiq Motors, told CapitalWatch in late 2021 that it's a matter of talks between the two countries.

"I think it's just the aftershock of the Didi saga," said Gong, referring to the delisting of Didi Global (NYSE: DIDI). "The two governments have to coordinate, in terms of regulations, the oversight, transparency, and the information disclosure. Then, once the issue has been worked out on the regulatory front, [Chinese] listings should resume in the U.S."

Currently, the talks are ongoing. China's securities regulator said in a statement on Friday that it is committed to open cooperation and resolving the issue, while it "firmly oppose the wrong practice of some forces politicizing securities regulation," as cited by the Global Times. The medium also reported that the China Securities Regulatory Commission (CSRC) and the Ministry of Finance have achieved "positive progress" through recent dialogue.

In light of the uncertain regulatory environment, many U.S.-listed Chinese companies have pursued secondary listings at home. At the same time, Chinese IPOs have become a rare sight on Wall Street, and only the small- and micro-cap companies continue to apply for U.S. listings as bigger companies have turned to the Stock Exchange of Hong Kong and Chinese exchanges.