The supercomputing company's chairman and CEO Zhang says the next milestone is creating an AI SaaS platform as a complete and open ecosystem, so as to provide AI services to end-users by integrating hardware, algorithm and software.
Anna Vod
Nov. 22, 2019 11:00 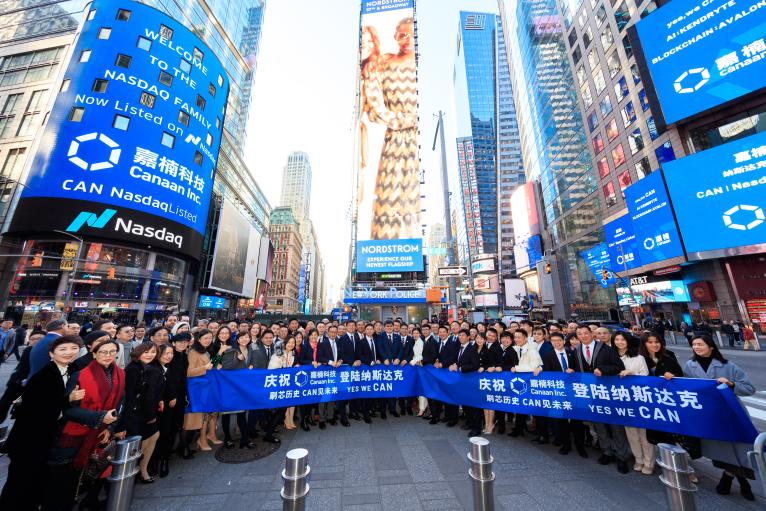 Canaan Inc. (Nasdaq: CAN) celebrated today another win for the blockchain industry as it completed its initial public offering in New York, raising $90 million.

The China-based provider of supercomputing solutions saw its shares peak at $13 upon liftoff on Thursday morning, then leveled off to $8.99 per American depositary share, 1 cent below the offering price.

The company sold 10 million ADSs, with an additional 1.5 million open for underwriters to cover over-allotments, if any.

"For me, the listing of Canaan is only a start," Nangeng Zhang, Canaan's founder, chairman and chief executive officer, told CapitalWatch in an interview on IPO day.

He added that, while completing an IPO is "hugely encouraging" for the team and for "everyone working in China's blockchain industry," he feels the pressure and the responsibility.

"There is still a lot to do in the industry," Zhang said.

Zhang saw the opportunity in blockchain technology in 2011, when there was barely a market for it in China.

"I was one of the first to know blockchain and Bitcoin at home."

A student at the time, Zhang said, he traded bitcoin and sold self-made mining machines on Bitcointalk – the original cryptocurrency forum launched by Satoshi Nakamoto, the so-called inventor of Bitcoin. Zhang came to realize that "blockchain could change the world."

Today, he said, Canaan has grown to be a "torchbearer in the industry."

In the first six months of 2019, Canaan was the second-largest maker of Bitcoin mining machines in the world in terms of computing power sold, according to data by independent market research firm Frost & Sullivan.

As the lead inventor in the company, Zhang oversees Canaan's development operations. He holds a bachelor's degree in electronic information engineering and a master's in software engineering from Beihang University. He left Beihang before he completed his Ph.D. after founding Canaan in 2013.

Canaan is headquartered in Hangzhou and operates a research and development center in Beijing. As of September, the company's R&D team had 126 members, headed by Zhang and Jingjie Wu, Canaan's vice president of technology, who also studied at Beihang University.

Asked whether the company had to overcome issues on the regulatory side early on, Zhang said that China promotes innovation and supports tech-driven companies like Canaan. He also wanted to make it clear that Canaan focuses on building the infrastructure and technology aimed at boosting efficiency in various economic sectors rather than trade or speculate in digital currencies.

He compared the use of blockchain to mobile internet.

"Blockchain in China only has a history of less than ten years, and it is still evolving," Zhang stated. "The leading grower in China's tech industry over the decade has been the mobile internet, which is largely about moving information around. The blockchain network, however, is about the movement of value. It has great potential in logistics, finance and audit."

Zhang also commented on the recent initiative in blockchain development, saying the central government's new policies will help boost the confidence of the capital market and serve as guidelines for Canaan's growth.

Scaling to Realize a Collective Dream

While the cryptocurrency industry has been highly variable, the demand for the technology remains high. From 2012 to 2018, the total revenue generated by Bitcoin mining surged at a compound annual growth rate of 153% to $5.5 billion, Canaan said in its prospectus, citing research by Frost & Sullivan. The market size of ASIC-based Bitcoin hardware has more than doubled each year since 2014, according to the report.

In its filing with the U.S. Securities and Exchange Commission, Canaan said it intends to use the majority of the proceeds from its IPO for "supply chain optimization" and repayment of debts incurred "in connection with our reorganization."

The company also reported it plans to boost its R&D for ASICs related to AI algorithms and applications, as well as ASICs for blockchain technology. In addition, Canaan intends to expand its AI blockchain business globally. This includes making strategic investments and setting up offices overseas, according to the filing.

Zhang told CapitalWatch that, in the future, Canaan hopes to set up a location in Silicon Valley.

Among other plans, Canaan seeks to integrate blockchain and AI. For instance, Zhang said, by fitting self-developed AI chips into blockchain computing machines, so as to address security risks through machine learning.

Canaan also intends to create an AI SaaS platform as a complete and open ecosystem, so as to provide overall AI services to end-users by integrating hardware, algorithm and software, Zhang said.

He added, "We will be developing new AI products, and we are expected to scale up our production of generation II chips in the first quarter of 2020. We also plan to roll out generation III AI chips in the late half of 2020, which will be equipped with 12nm processing technique and is expected to be applicable to edge and cloud computing. We will keep launching new generations of AI chips."

Looking back at the day, so significant for the supercomputing sector, Zhang said that the success of Canaan was made possible by a collective dream and efforts of his colleagues.

Zhang said, "We dedicate ourselves to providing supercomputing solutions to our customers, raising efficiency of our society and making people's lives better."