Xunlei asks its former CEO Lei Chen to return to China as soon as possible to cooperate with the investigation.

The stock of Xunlei Ltd. (Nasdaq: XNET) tumbled 7.87% to $3.16 per American depositary share by Thursday after announcing its former CEO Lei Chen faces an investigation allegeging his involvement in the crime of embezzlement.

The Shenzhen-based cloud computing and blockchain company said in its official Wechat account today that the company filed a complaint with the Shenzhen Public Security Bureau in April 2020. The Bureau filed this case recently, Xunlei added. 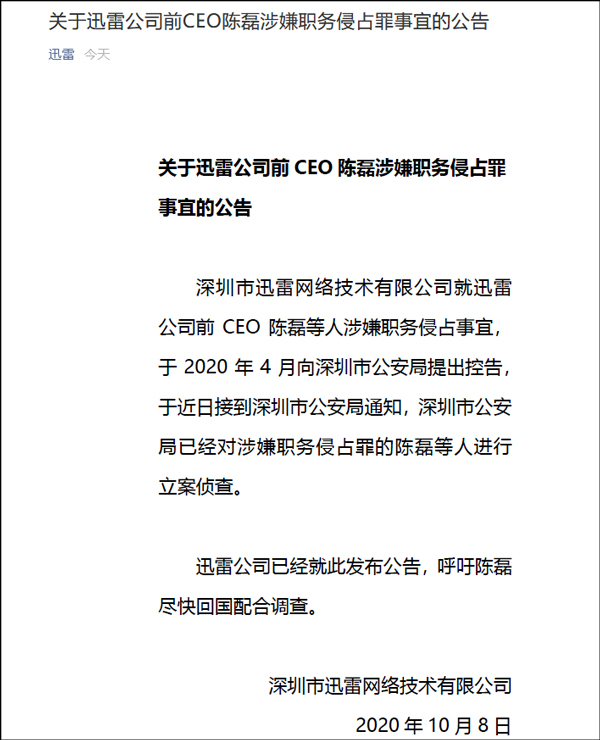 Xunlei asked Chen to return to China as soon as possible face the investigation. Chen served as the first CTO of Xunlei in November 2014, and concurrently as the CEO of Xunlei's subsidiary One Thing Tech Corp. Chen announced as the CEO and director of Xunlei in 2017.

Topics:Xunlei; China; U.S.
READ MORE
COMMENTS0 comments
Sign in
We reserve the right to remove any content at any time from this Community, including without limitation if it violates the Community Standards.
SUBSCRIBERS ONLY
MOST READ
LATEST NEWS
HOME
CHINA STOCKS
U.S. STOCKS
COMMENTARY
INVESTOR RELATIONS
INVESTIGATIVE RESEARCH REPORT
ABOUT US