Will the U.S. president extend the sanctions against the so-called last dictator of Europe? The crises in Belarus highlights broader tensions between East and West.
Anna VodAug 13,2020,06:55 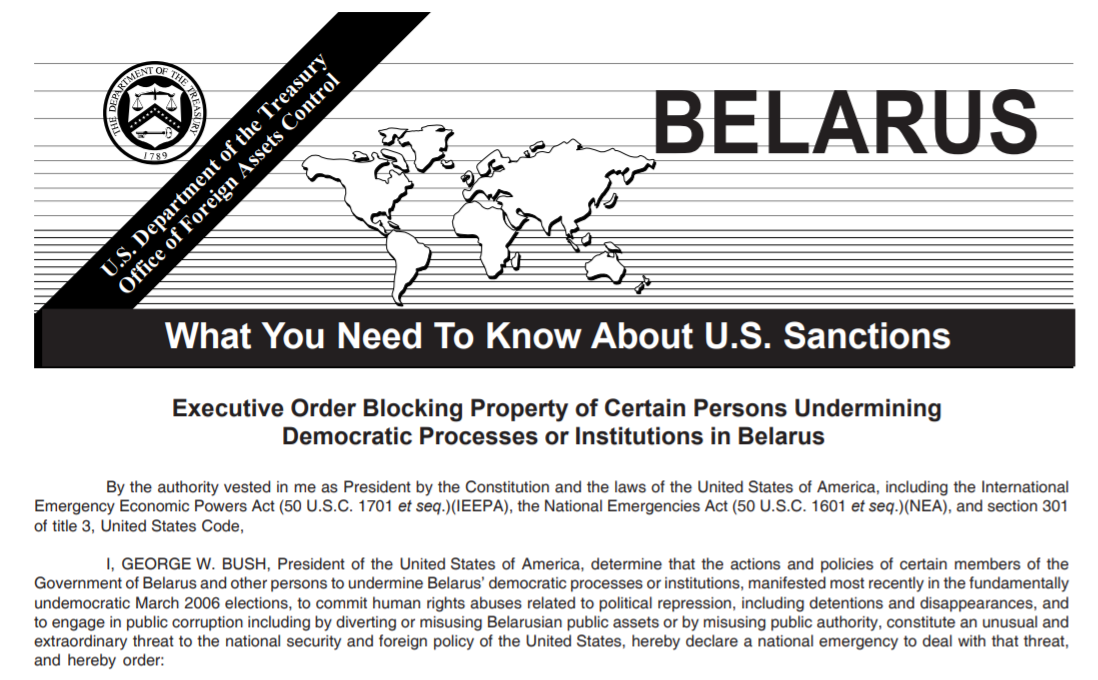 There is precedent to the embargo power President Trump has exercised too often.

The most recent move went into effect on Friday, targeting Hong Kong leader Carrie Lam and 10 other city officials in response to the enactment of China’s national security law. In a statement on its website, the U.S. Treasury blames Lam as "directly responsible for implementing Beijing's policies of suppression of freedom and democratic processes,” referring to supporting the extradition bill of 2019. The new law was imposed by President Xi Jinping on June 30 and among other things effectuated the extradition bill which Lam withdrew in response to monthslong mass protests.

The new national security law forbade the "secession, subversion, organization and perpetration of terrorist activities and collusion with a foreign country or with external elements to endanger national security."

In other words, Beijing has the ability to crackdown on dissent in the city at will.

The order threatened punishment in response to any criticism of the leadership in either Beijing or Hong Kong. As The Washington Post wrote at the time, the provisions came right out of "China's dictatorial handbook."

The Trump administration’s sanctions froze the U.S. assets and prohibited Americans from doing business with the 11 individuals involved. In the statement, the U.S. Treasury said, "The 11 individuals designated today have implemented policies directly aimed at curbing freedom of expression and assembly, and democratic processes, and are subsequently responsible for the degradation of Hong Kong's autonomy.”

On Friday, China’s state-run news agency Xinhua added wood to the fire by citing Carrie Lam as saying “the law on safeguarding national security in Hong Kong is conducive to the region's prosperity and stability and to the steady and sustained development of ‘one country, two systems.’”

Trump had also ended Hong Kong’s preferential trade treatment and signed a bill sanctioning foreign individuals and banks that supported the violation of the 1984 Sino-British Joint Declaration which established the city's autonomy. On Tuesday, the Trump administration issued a notice requiring Hong Kong goods exported to the United States to be labeled as “Made in China” and thus falling under the same tariffs. The order is set to take effect on Sep. 25.

“We urge the Belarusian government to respect the rights of all Belarusians to participate in peaceful assembly, refrain from use of force, and release those wrongfully detained,” U.S. Secretary of State Mike Pompeo said on Monday after masked and helmeted Belarusian security forces unleashed brutality against their own people – peaceful demonstrators who took to the streets following the so-called presidential election.

Belarus has been in chaos since Sunday night, when Alexander Lukashenko, deranged ruler of the country since 1994, claimed 80% victory in the election. Earlier, he detained or forced to flee a number of opposition leaders. Against Lukashenko in this election stood Svetlana Tikhanovskaya, the wife of a jailed candidate. In the run-up to the election, Tikhanovskaya became the symbol of change for Belarus but was forced to flee the country on Monday, threatened by the regime. Meanwhile, Lukashenko’s troops used stun grenades, tear gas, water cannons, and rubber bullets to crush the protesters and beat and detained thousands of individuals, according to various media reports.

The West has been slow to react, but some, including Germany and the UK, condemned the violence and the faked election results. Reuters reports that Europe is weighing new sanctions. Meanwhile, just as tensions between the U.S. and China have soured, Sino-British relations are at their worst in decades in part due to Xi's strongman stance on Hong Kong. Xi's welcoming of authoritarian rule in Belarus, like Putin's approval, is part of a larger East versus West geopolitical battle. How will the U.S. weigh in on Lukashenko?

In the U.S., Kayleigh McEnany, the White House Press Secretary, said to reporters on Monday, asked for the president’s view on the Belarus crisis, “We are looking at that and were deeply concerned by the Belarus presidential election. Severe restrictions on ballot access for candidates, prohibition of local independent observers at polling stations, intimidation of opposition candidates and the detention of peaceful protesters and journalists have marred the process and we urge the Belarusian government to respect the right to peaceably assemble and to refrain from use of force.”

On Wednesday, protests in Belarus continue. Lukashenko has told reporters that the demonstrators were drunks and drug addicts, and claimed there were many foreigners among them. Brutality against the masses by government forces also continues.

In a video posted on YouTube after she fled Belarus, Tikhanovskaya said: "I made a very hard decision, I've made this decision on my own ... and I know that many people will understand me, many will judge me and many will hate me but god forbid you will ever have to face the choice that I had to face."

Formerly, according to CNN, the Trump administration has attempted to improve its relationship with Minsk in countering Russia. The sanctions imposed against Lukashenko by George W. Bush in 2006 on the grounds the country's elections were undemocratic were extended until June 16, 2020, but some sanctions have been lifted.

Will the current U.S. president, typically outspoken to an unbearable degree, stay quiet on the Belarusian crisis until its outcome becomes clear?