As Covid-19 cases spike at alarming new highs across the U.S., the demand for pizza delivery continues its surge. 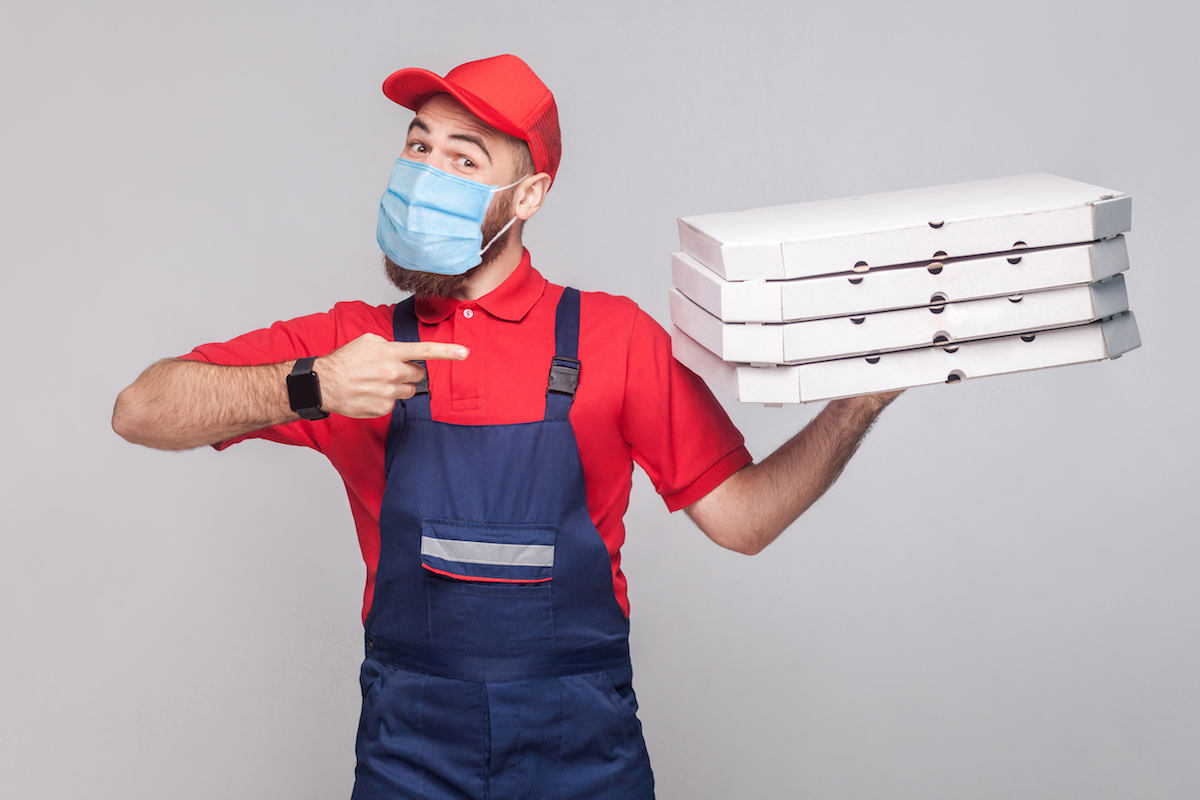 Attracting consumers during the coronavirus hasn’t been easy, but pizza deliveries have been in high demand. While delivery apps like DoorDash have enabled restaurants not traditionally focused on delivery to up their delivery game safely and without customer contact, non-pizza focused restaurants have not fared nearly as well as their pizza player counterparts.

Delivery Serving up Empty Profits for Casual Diners, Not Pizzerias

Just ask shareholders of Darden Restaurants, Inc., (NYSE: DRI) operator of Olive Garden and LongHorn Steakhouse and Dine Brands Global, Inc., (NYSE: DIN) operator of Applebee's and IHOP. Casual dining without the whole “dining” part isn’t near as enticing to customers. Patrons go to these spots for the atmosphere and table service, not to receive a cold chewy steak an hour or so later on their couch. In early June, 63% of the guests said they are likely to order pizza at the time compared with 51% wanting burgers or sandwiches, according to the restaurant management platform Upserve.

In 2019, consumer spending deliveries reached roughly $11 billion, which was the highest amount since 2007, according to market research provider Statista. 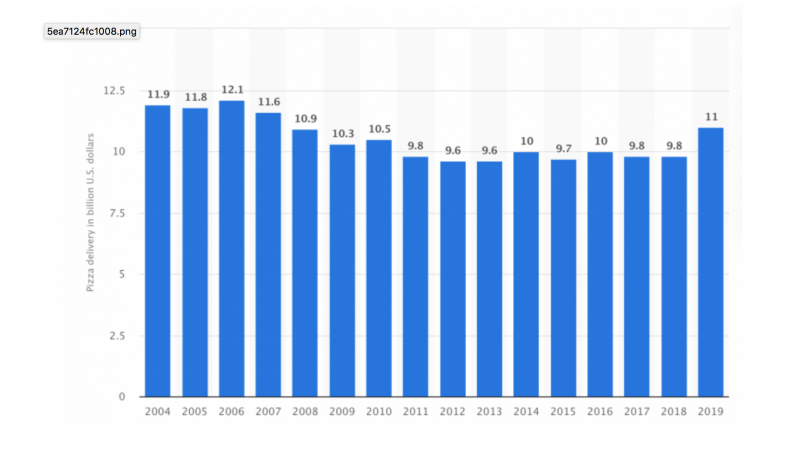 As a result, market leaders have watched their stocks pick up momentum. As Covid-19 cases spike at alarming new highs across the U.S., the demand for pizza delivery is likely to continue its surge.

It’s Not Just Delivery Its Domino’s

In the first two months of the second quarter, Domino’s same-store sales leaped 14%. While the announcement helped the stock gain, its shares were already up significantly year-to-date. Now the stock trades more than $380 per share. However, the surge may not be done as Guggenheim analyst Matthew DiFrisco increased his price target on Domino’s to $447 per share in June from $417.

He added, “DPZ historically has held a premium to peers given superior total retail sales growth both domestically and internationally along with an asset-light model.”

While Domino’s is thriving in a Covid-19 world, the stock has been on the upswing for almost a decade now. Previously, the Michigan-based company was known for convivence and its price-friendly portfolio, not so much for pizza quality. In 2010, when the company was trading under $20 per share, Domino’s took accountability for its lackluster product and launched a new pizza recipe intending to make the product, well, edible. It worked. Now, it operates more than 17,000 stores compared with just under 9,000 in 2009.

In the short term, I would wait for the stock to fall close to $370 per share. As for the long term, I’m a little more bullish and it should be able to continue its strong growth. In January 2019, Domino’s estimates $25 billion in annual global sales by 2025, its store count projected to hit 25,000. According to Edison Trends, Domino’s in the roughly six months through Feb. 16 maintained a market share between 49% and 54% of online pizza sales, besting competitors like Papa Johns and Pizza Hut.

Another seeing a rise in demand for pizza delivery is Papa John's International, Inc. (Nasdaq: PZZA). Last week, Papa John’s said same-store sales in the five weeks through June 28 at its North American restaurants leaped 24% from the same period last year, while international sales ticked up 6%.

Investors may now be kicking themselves if they missed out on buying Papa John’s when a pandemic triggered sell-off sent the stock below $30 per share in March. Now, the stock is up significantly, trading in the range of $80 and $85 per share. Also, Wedbush analyst Nick Setyan started coverage on Papa John’s last week and placed an outperform rating with a price target of $95 per share.

One of the reasons for Setyan’s bullish outlook on the pizza chain pertains to its innovative menu. He said that menu innovation wasn’t at the top of the list under its former chief executive officer John Schnatter (also known as “Papa John” in the commercials). The analyst also noted once Covid-19 ends that its current CEO Rob Lynch could unveil a new product every couple of months at compelling prices, which could help improve lunchtime sales and satisfy customer appetite beyond pizza.

Recently it launched a Shaquille O’Neal inspired pizza—the former National Basketball Association (NBA) player serves as a board member and restaurant owner for the company. The pizza, called Shaq-a-Roni is described by Papa John’s a “bigger pizza experience” and contains extra cheese and additional pepperoni.

However, you should wait until its stock falls slightly to around $80 per share before buying. Shares of Papa John’s are up 32% YTD.

The Not So Yum Brand of Pizza

It’s been an interesting ride this year for pizza hut, owned by YUM! Brands Inc. (NYSE: YUM). Before the pandemic hit the U.S., YUM, which also operates KFC and Taco Bell, had already warned that 2020 could fall short of its expectations because of the outbreak in China. In 2016, it spun off the subsidiary Yum China Holdings, Inc., (NYSE: YUMC) into its own public entity.

In the fourth quarter of 2019, YUM’s U.S. store same sales at Pizza Hut fell 4% year-over-year. Overall, it has struggled to keep up with Domino’s and was forced to close 361 U.S. restaurants in 2019. As a result, Kevin Hochman was appointed the interim president of Pizza Hut’s U.S. division. Hochman has served as KFC’s U.S. president since 2017; he has been credited with helping turn around the iconic fried chicken chain.

In early May, Pizza Hut hit its largest delivery and carryout average sales week in the U.S. in eight years. From the end of April through May, same-store sales surged to the low teens.”

“Digital is a huge part of the business,” Hochman told Fox Business in late June.

He added, “The competing quick-service pizza chain is aiming to boost its app and website experiences, which is partly due to the evolution that the pandemic has forced onto restaurants.”

Meanwhile, NPC International, the biggest U.S. franchisee of YUM’s Pizza Hut has filed Chapter 11 bankruptcy. But that’s not all: Cowen analyst Andrew Charles projects that if NPC stops paying royalty fees it could forfeit up to $54.2 million of annualized royalty revenue or earnings per share of 13 cents.

While there is certainly room to grow, there are a variety of unknowns with YUM, which operates more than 50,000 restaurants globally. While it has challenges, it is more diversified with its KFC and Taco Bell brands. But YUM’s revenue has been on the decline for years. In the full year 2019, YUM brought in around $5.6 billion in revenue versus $13.63 billion in 2013. Shares are down 12% YTD, but the stock is a hold for now.

Some privately held firms to take a look at is California Pizza Kitchen, Inc. (CPK), and Little Caesars.

For Little Caesars, earlier this year it returned the pizza delivery game at 90% of its stores for the first time in 20 years. The third-largest pizza chain in the world (behind Domino’s and Pizza Hut) generated sales of roughly $3.81 billion in the U.S. in 2019, slightly down from $3.82 billion figure in the previous year, according to Statista. Looking back, the timing couldn’t have been better for Little Caesars to bring back pizza delivery, as that will no doubt benefit the company during the pandemic. 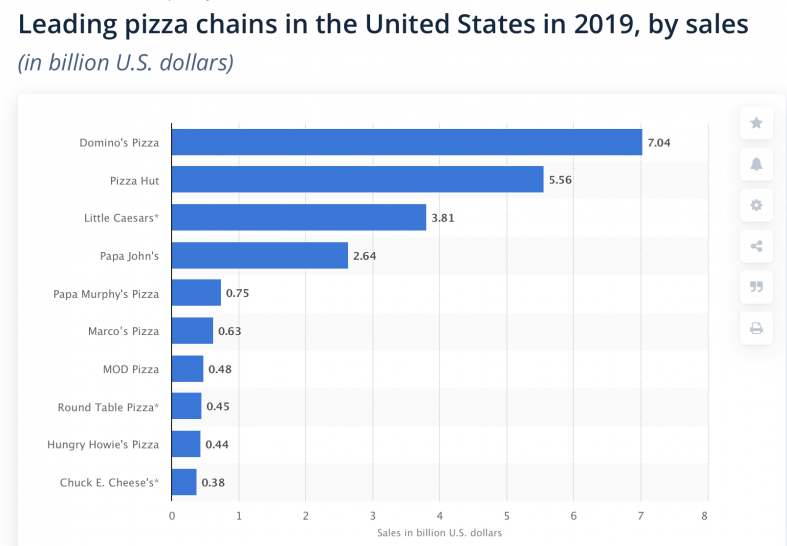 Things appear to be a little more challenging for CPK. Even before Covid-19, CPZ didn’t have a great year; in 2019 it generated sales of $635 million, down from the $640 million in 2018. Now, things have taken a different turn as the pizza chain was seeking to avoid a possible bankruptcy filing by restructuring its debt, as reported by The Wall Street Journal in April. It hired FTI Consulting Inc. and Gibson, Dunn & Crutcher LLP as legal representatives.

CPK was taken private by Golden Gate Capital in a $470 million deal in July 2011. The company made its trading debut in August 2000 on Nasdaq under the ticker “CPKI”.

Now is a good time to be in the pizza delivery business. But is it a good time for investors to buy pizza stocks?

Patience on Domino’s and Papa John’s

According to Research and Markets, the global pizza market is estimated to hit $233.26 billion in 2023, representing a compound annual growth rate of 10% from 2019. The report attributes factors such as a rise in the youth population and a growing number of pizza franchises that are expected to drive the market.

As a New Yorker, I have access to the best pizza on the cheap in the world (sorry Italy, it’s true). The fact that Domino’s even exists in NYC is a mystery to me. Personally, I'll take a slice at Joe’s Pizza or John of Times Square any day of the week. But when you leave the Tri-State area and you are in a pizza mood, your choices are limited to Domino’s and Papa John’s and maybe Pizza Hut. It may not be a New York slice, but it will give you the cheese and meat and “sauce” you need to satisfy your pizza cravings. Pizza is like sex, even when it is bad, it’s still good. Plus, you can’t get Covid-19 from pizza—but make sure to Lysol the pizza box just in case.