Both non-lethal weapons stocks and old-fashioned gun stocks have been rising as civil unrest swells. 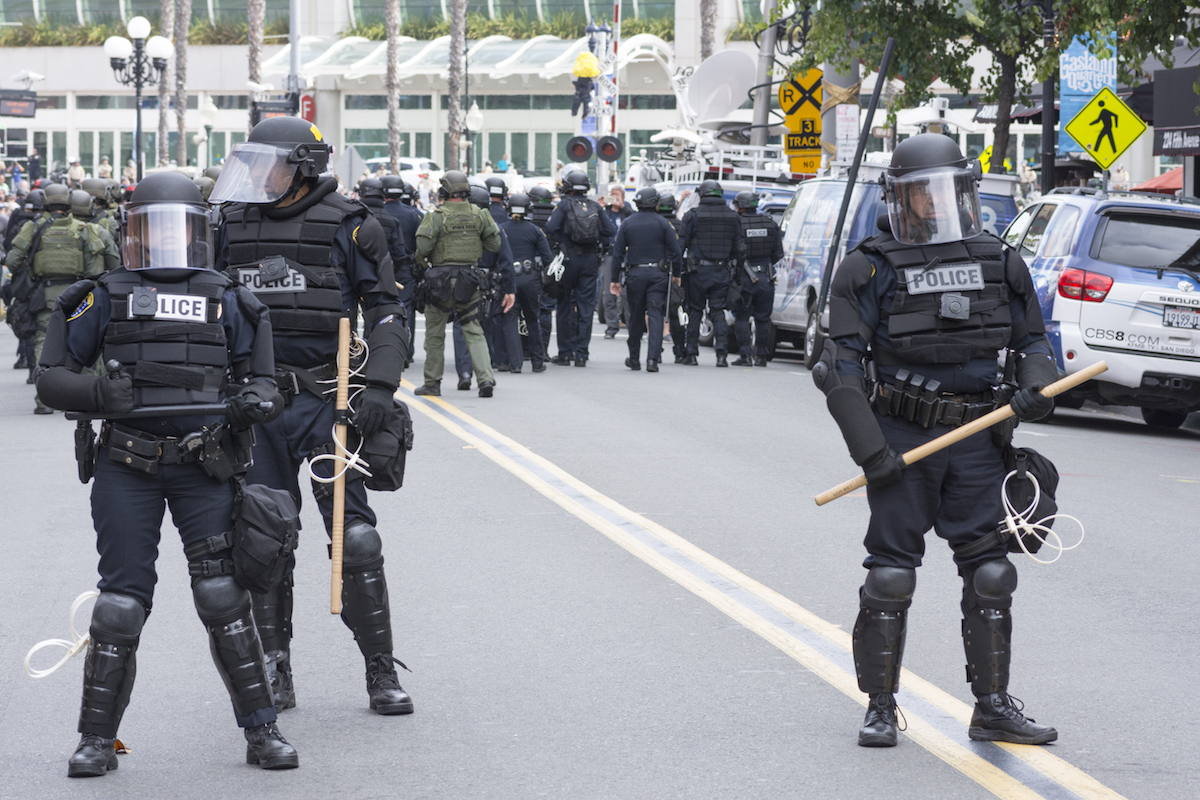 Since the murder of George Floyd has sparked outrage across the United States, both stocks in the non-lethal weapons and lethal weapons sectors have seen gains. While the tragic killing of Mr. Floyd had nothing to do with a firearm or a weapon, fears of federal regulation over these products have led to the surge in demand.

The Moves Towards Police Reform Have Already Begun

Police reform is underway, as President Donald Trump has already signed an executive order to improve practices such as forming a database that tracks complaints against officers using excessive force. A tepid response, critics on the left proclaim, but something, anyhow.

The House also passed a police reform bill last week, but Senate Majority Leader Mitch McConnell has signaled that he would not accept it. However, there will likely be more reform on the way as New York has joined other cities like Minneapolis and Denver in the ban on police chokeholds. Earlier this month, New York mayor Bill de Blasio pledged to cut funding from the police department and relocate it to youth and social services.

“The details will be worked out in the budget process in the weeks ahead. But I want people to understand that we are committed to shifting resources to ensure that the focus is on our young people,” de Blasio said.

As for guns, the Alexandria City Council passed legalization earlier this month banning guns and ammunition from city property. It will into effect as a law on July 1.

While firearm stocks have seen some gains, whether they’ll be able to keep rising in the long term relative to non-lethal weapons is unclear. Let’s take a look at some stocks that provide firearms and ammunition and compare them with non-lethal weapons providers.

One stock that has surged on Americans’ fears over recent looting and rioting is ammunition maker Sturm, Ruger & Company, Inc. (NYSE: RGR). Before the protests, Americans were preparing for civil unrest in the nation, as sales for the Connecticut-based company rose 9% in the third quarter to $123.6 million.

Once Covid-19 was declared a pandemic in mid-March, Sturm has been making efforts to meet the demand. Its chief executive officer noted in a first-quarter conference call to analysts that the company had a “very active hiring process.” Since reporting its first-quarter financials in early May, Sturm has watched its shares rise 35% to date.

The research investment bank Lake Street Capital Market believes its stock surge will continue and increased its price target to $80 per share.

“With the outbreak of civil unrest very late in May, we think the high demand is likely to continue into June,” the firm said. At $72.45 per share as of midday June 29, the stock is up about $10 per share in June.

The note continued, “Although it is hard to weigh the drivers in demand, we think there is still some unfilled demand from COVID, recent buying due to civil unrest and continued and perhaps heightened buying due to the upcoming election and potential for increased regulation following the election."

Another lethal weapon shooting up recently is the iconic Smith & Wesson Brands, Inc. (Nasdaq: SWBI). The provider of weapons and products for shooting, hunting, as well as other outdoor accessories has watched its stock rally 57% since the beginning of April.

Recently, Wedbush analyst James Hardiman more than doubled his price target on the company to $18.00 per share and wrote in a note to clients “Our dealer contacts have seen an unprecedented level of demand, driven initially by nationwide COVID lockdowns, then by stimulus checks and most recently by civil unrest." However, he has placed a hold on Smith at $18 per share.

In the quarter ending April, Smith reported its sales soared 33% year-over-year to $233.6 million on earnings per share of 57 cents. The results beat the Zacks Consensus Estimate of 48 a share and its revenue projections by 5%. While it did not provide guidance, Smith should be poised for strong demand for the remainder of the year. The stock now trades around $20 per share

It’s been a little bumpier for Vista Outdoor Inc. (NYSE: VSTO) this year, but its stock has mostly been in the green. While now trading at a 20 month high, the ammunition and outdoor products maker hit a brief hiccup May after reporting disappointing revenue in its latest financials.

In the fourth quarter ended Mar. 31, Vista’s revenue plunged 17% $426.3 million, which was below the FactSet consensus of $454.9 million. It also provided as disappointing outlook said it expected revenue in the range of $370 million to $400 million in the first quarter of fiscal 2021, down significantly from the FactSet consensus of $471 million.

However, the outlook was issued before the George Floyd protests, so perhaps demand has picked up since. It is important to note, however, that the company no longer distributes firearms, having sold its firearm operations for $170 million to Long Range Acquisition. Its inventory consists of ammunition and gun accessories such as American Eagle bullets, Blackhawk gun holsters, and Bushnell sights.

Last week, Eric Wold, an analyst at B. Riley FBR reissued a buy rating on the stock and has lifted his price target from $13 to $16 per share.

Earlier this month Wold said: “Given the combination of this being a presidential election year along with the ‘stay-at-home’ environment creating more new gun owners and driving outdoor participation, we expected continued demand strength in the coming months/quarters.”

Arizona-based Axon, which makes stun guns has watched its shares take a big jump since late March. May and June particularly were strong months for the company after a strong first-quarter report and protests following the murder of George Floyd. In the period, Axon’s revenue were $147.2 million, beating the $131.7 million that Wall Street was projecting. It also brought in profits of 40 cents a share versus the expected 18 cents.

Since its close on May 6, shares are up 44% to date. It’s also important to note that Axon is a market leader in police body cameras and dashboard cameras. It works with 17,000 of 18,000 law enforcement firms--1,200 of the biggest police agencies take up 70% to 80% of Axon’s total revenue.

“In the last few days, we have actually really taken a hard look at ourselves and really put a focus on what we could do to add systemic bias to the problems we want to solve, Rick Smith, the CEO of Axon told Yahoo! Finance earlier in June.

He added, “We’re the market leader in using virtual reality to put police through different types of scenarios to teach them different skills around empathy and dealing with the people they are dealing with.”

While Axon has pulled its full-year guidance, the company’s stock will be one to watch. The publicly listed company since 2001 hit an all-time high of $104.90 per share earlier this month.

Another stock that could benefit from the chaos is Shotspotter (Nasdaq: SSTI). Despite the promise of a potential surge, revenue growth has slowed since 2018  for the provider of security solutions for law enforcement.

Of course, now, the impact of Covid-19 certainly hasn’t helped. Although its revenue improved 9% year-over-year to $10.46 million in the first quarter, it missed Zack’s Consensus Estimate by 3%. Since reporting the results, the stock is now down to date.

It has updated its full fiscal year 2020 guidance in its first-quarter financials and now expects to generate revenue in the range of $43 million and $46 million, which would be up 9% from the same period in 2019. Previously, Shotspotter expected revenue to be between $46 million to $48 million.

The California-headquartered company gets around a third of its revenue from contracts in New York City and Chicago. However, it only serves three of the 10 largest U.S. cities. But if it can attract more cities, the gunshot detector may see some strong growth. Shares of SSTI are down YTD.

If you are looking for a non-lethal provider whose stock skyrocketed, then turn your sights towards Byrna Technologies Inc.(OTC: BYRN). Before June 9, the personal security device maker traded cents on the dollar.

However, Byrna reported on June 9 that its net sales skyrocketed 1000% YTD to $1.33 million compared with the same period in 2019; its stock then jumped from 62 cents to $1.11 per share. The reason for the insane surge came on Fox News host Sean Hannity’s mention of Byrna’s HD (Home Defense) personal security device, saying that this form of non-lethal weapon could be a part of the solution to squashing the riots and protests across the country.

According to Byrna, its online orders exploded, surpassing $2.4 million worth in 24 hours after the Hannity promotion. Byrna HD shoots .68 caliber projectiles filled with a powerful chemical irritant. Unlike pepper spray, stun guns or tasers, it provides a safety zone of 60 feet and comes with multiple easily reloadable magazines. The product was originally designed as a homeowner tool to keep unwanted visitors away but can also be used by police to temper protests.

With shares now up 123% to date from early June, Byrna will be a stock to watch. The company also has a goal of listing on Nasdaq.

Police reform is just at the beginning and recent reelections of Democratic progressives like Jamaal Bowman and Alexandria Ocasio-Cortez in New York will no doubt draw more attention to police reform as well as gun restrictions. However, the more the people who like guns feel like the police are handicapped, the more guns they might buy. As for non-lethal, the more police reform there is the more these non-lethal weapons might be part of the solution. Police reform might raise the stock of both lethal and non-lethal weapons concurrently—a rising tide of chaos and reform might raise all boats.

In a poll by the President’s choice of media by the so-called “Failing New York Times,” Joe Biden has a lead of 14 points over the Buffoon-in-chief Trump. While Biden is not a noted progressive, his Vice President pick could be. But perhaps most importantly, Kentucky state Rep. Charles Booker has moved ahead of Amy McGrath in the race to see who challenges McConnell's seat in November. With his Brady Bill on his resume, this election, as Obama’s did before, will cause many a gun enthusiast to head to the gun store.

Not Exactly Non-Lethal but an Improvement

Part of defunding police would likely impact those who engage in gun sales to law enforcement including Sturm and Ruger. The company supplies handguns and rifles to both the Law Enforcement and Military.

People have been protesting for change; the police shoot and kill around 1,000 people every year. Now, while that is fewer, especially if weighed per capita by police encounter than it has been in decades, it is still afar above the norm for a Western country.

While shifting towards non-lethal weapons like tasers don’t fully solve the problem, electricals shocks are undeniably the better option. A Reuters investigation through 2018, documented at least 1,081 U.S. people died after being shocked by the police via a taser with most occurring after the year 2000. African Americans accounted for at least 32% of those deaths.

If you are concerned with Axon’s stun guns, then you could play it safer with Shotspotter’s security solutions and Byrna’s HD. But no question, significant police reform is coming—and it is about time.