Why Recent High Will Prove to Be Post-Crash-Market High

The SCPA algorithm (Statistical Crash Probability Analyses), indicates the probability is 100% that the markets for 13 of the world’s largest GDP ranked countries, including the U.S., reached their post-crash highs from... 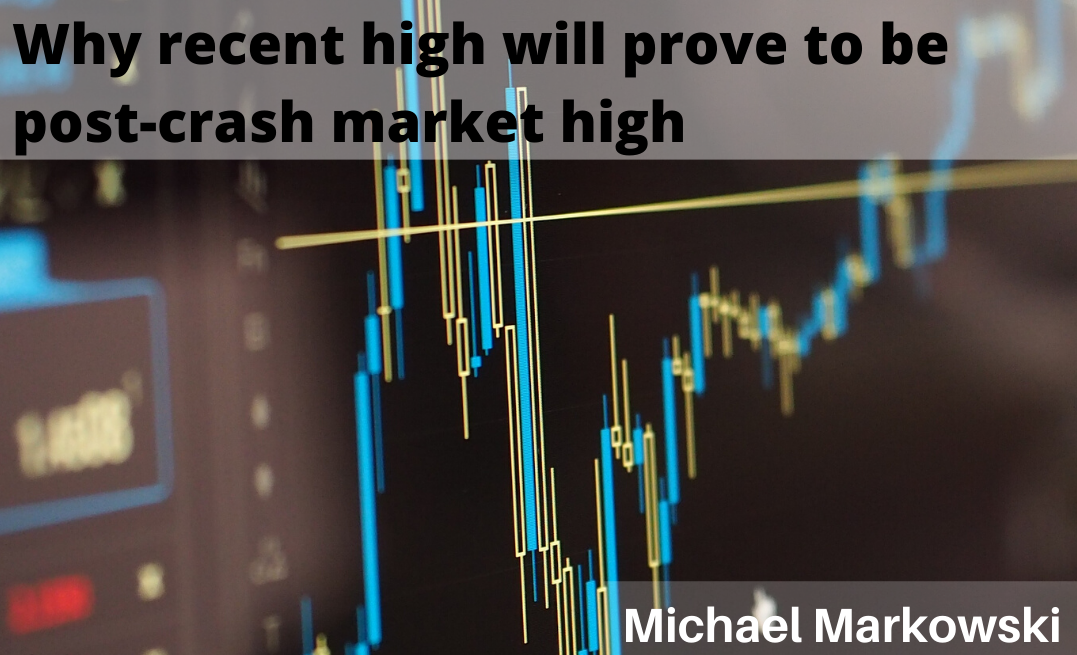 The SCPA algorithm (Statistical Crash Probability Analyses), indicates the probability is 100% that the markets for 13 of the world’s largest GDP ranked countries, including the US, reached their post-crash highs from Friday June 5, 2020 to Monday June 8, 2020.

These markets will not exceed their post-crash highs for many years.  These markets have started their journey to their 2022 bottoms in the final fourth quarter of that year.

The SCPA, developed as a result of empirical data research on prior market crashes, has been accurate at forecasting both the 2020 pre-crash event and 2020 post-crash events.

My April 1, 2020 article, “Markets now at tipping point; roller coaster ride will be epic!”, contained the SCPA’s forecasts for the events that would occur after the markets of the 13 countries reached their relief rally highs.  Below are the SCPA’s forecasts from the article for two events:

Given that the markets for all 13 countries reached their post-crash highs from June 5th to June 8th the probability is high that the first forecast above will prove to be accurate.  The one thing that has been for certain in 2020 is that all 13 of these markets have been acting in concert.   All of these markets:

As of June 19, 2020; the markets for 8 of the 13 countries had climbed back to within 17% of their 2020 highs.  My suspicion is that the markets of the five countries which have not climbed to within 17% of their 2020 highs won’t. While the five have failed to perform as forecasted, they are great additions to my ongoing research of market crashes.

The empirical data from these countries’ crashes will improve the accuracy for the forecasting of future crashes. Finally, due to their lack of buoyancy, the markets for the five will probably have the worst percentage declines when compared to the other markets at their final Q4 of 2022 bottoms.

Based on my ongoing empirical research of the Dow 1929-32 and the NASDAQ 2000-02 market crashes which have the same genealogy as the 13 countries whose markets crashed in 2020, the forecasts for each of the 13 countries can become specific.  To that end, these 13 countries have been broken up into two groups:

Japan, South Korea, Germany and the US comprise the four who are in the single digit group.  Based on my preliminary analysis the markets of the four countries, they will not have declined by 79% when they reach their final bottoms in Q4 of 2022.  The percentage decline forecasts for the markets of the US and the other three countries will be made available soon.

The remaining nine countries constitute the second group, all of whom are now members of the SCPA Global Crash Index.  The table below contains the countries and their post-crash percentage climbs to within 2020 highs.

The chart below depicts the performance of the SCPA Global Crash index from its 2020 high through June 19, 2020.

The fact that the index climbed back to a post-crash high of within 17% of its 2020 high further validates the SCPA’s efficacy.   The charts for 1929 and 2000 crashes depicted below confirm that the 2020 crashes for the markets of the US and a dozen other countries have the same genealogy.

Some argue that the US stock market is insulated from the rest of the world.   The chart patterns for the Dow and S&P 500 indicate otherwise.  The charts depict that both of the US indices are behaving similarly to the SCPA Global Crash index as well as to the prior historical market crashes.

The history books will depict that the post-crash rally of 2020 was the “Granddaddy” of all Bear Market rallies.  If you are still in the market, get out before it’s too late.

To profit from a market that will steadily decline subscribe to the Bear Trader here.

Your comments are welcome.