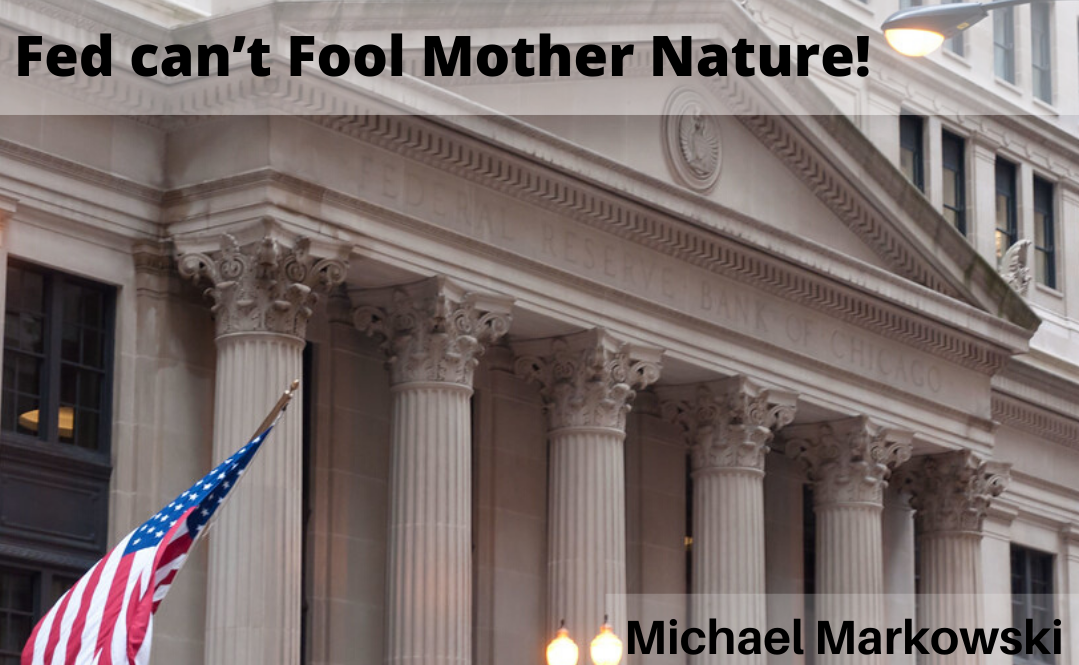 The S&P 500’s rally from its March 2020 low to within 13.2% of its 2020 high has been primarily fueled by the US Federal Reserve’s monetary stimulus.  The Fed has and continues to spend trillions to provide the economy with liquidity and to artificially prop up the markets.  The rally will prove to be futile and based on my calculations below the S&P 500 will have declined by 85.3% when it reaches its final bottom in Q4 2022.  There is no amount of monetary or fiscal stimulus that will enable investors to escape the secular bear which replaced the 2009-2020 secular bull market on February 20, 2020.

Secular bulls and bears are defined by “public” or consumer sentiment.  Investor sentiment is completely irrelevant to a secular bull or bear.  Neither government fiscal or central bank monetary stimulus change the mood of the public from negative to positive.

The blue line in the chart below depicts the growth trend for the Dow Jones index over the last 101 years.  The 7.5% growth trend is the equivalent to sum of the percentage changes for population growth and inflation. For those periods in which the public is optimistic, such as the roaring twenties, the index for an extended number of years above the trend line.  When public becomes pessimistic, as was the case after the 1929 crash, Dow trades for extended number of years below its 7.5% trend line.

The 1949 to 1966 bull in the above chart was due to the public becoming optimistic after the end of World War II.  The 1966 to 1982 secular bear included the Vietnam war, interest rates of 20%, the highest inflation rate since the civil war and the first and only resignation of a US President.

The circumstances around the crashes of the markets from their 2020 all time or multi-year highs and the ensuing collapses for the economies of the US and 12 other countries are eerily similar to the US’ 1929 crash.  The crash of 1929 resulted in the US unemployment rate surging by 400% from September 1929 to March 1930 and doubling to 800% in September 1930.  Similar to 2020, the President and US government in 1929 were proactive to mitigate damage to the economy.   Despite the enactment of fiscal stimulus consumers still cut back their spending.   See 1929 and 1930 excerpts from Herbert Hoover Presidential library archives:

“After the stock market crash, President Hoover sought to prevent panic from spreading throughout the economy.  In November, he summoned business leaders to the White House and secured promises from them to maintain wages.  According to Hoover’s economic theory, financial losses should affect profits, not employment, thus maintaining consumer spending and shortening the downturn.  Hoover received commitments from private industry to spend $1.8 billion for new construction and repairs to be started in 1930, to stimulate employment.

The President ordered federal departments to speed up their construction projects and asked all governors to expand public works projects in their states. He asked Congress for a $160 million tax cut while doubling spending for public buildings, dams, highways, and harbors.

Praise for the President’s intervention was widespread; the New York Times commented, “No one in his place could have done more. Very few of his predecessors could have done as much.”  Together, government and business spent more in the first half of 1930 than in the entire previous year. Still consumers cut back their spending, which forced many businesses and manufacturers to reduce their output and lay off their workers.

The common denominator for 1929 and 2020 crashes and collapsing economies for the US and a dozen other countries is what separates them from all of the other notable market crashes.  That pivotal piece is the extreme and immediate polar opposite change in sentiment for an entire population within days of a crash commencing.

Consumer sentiment went from extremely positive with unemployment at an all-time low in 1929 to extremely negative by the beginning of 1930.   The University of Michigan’s recent US consumer confidence survey results is a great example.   The chart below depicts the sudden and significant decline in consumer confidence in April 2020 as compared to February 2020’s reading which was the highest since 2002.

Consumers worldwide are becoming increasingly pessimistic and are retrenching due to their concerns about being infected with the Covid-19 Coronavirus and also about losing their jobs.  The chart below depicts the 500% increase in US unemployment from February 2020 to April 2020.

The recovery from the fears of pandemics job losses will likely take years for consumers to overcome.  Thus, the probability is extremely low that consumer sentiment will reverse from extremely negative to even somewhat positive in the current decade.

The S&P 500’s final bottom low and percentage decline from its high prediction are further supported by the SCPA (Statistical Crash Probability Analyses) algorithm’s forecast. The SCPA has forecasted 31-month journeys for the markets of the countries to their final October to December 2022 bottoms which will be 79% to 89% below their 2020 highs.

SCPA (Statistical Crash Probability Analyses) is forecasting a 100% probability for the following post-crash of 2020 events:

The table below contains the SCPA’s initial forecasts that were made in March 2020.  All four of the precise forecasts were accurate.

To view my 3:44 second video about Secular Bulls and Bears click here. Read my March 31, 2020, article entitled “Embrace the Bear” to learn about: