Schools in some provinces in China are expected to reopen within a month or two, following the coronavirus outbreak. In the meantime, education companies like OneSmart are pushing into the online learning space.
Anna VodMar 09,2020,11:30 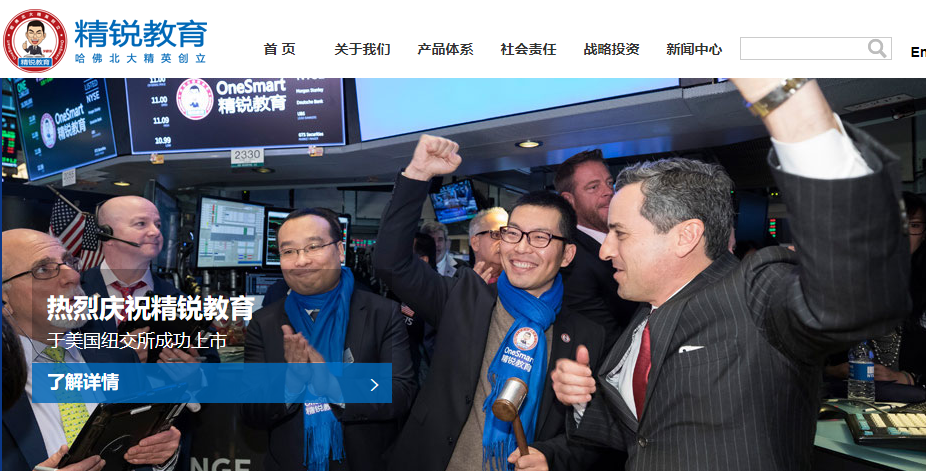 China’s online education market has been a hot topic lately, fired up by school closures during the coronavirus outbreak. Closed for the Chinese New Year in January, schools have yet to reopen, and they have certainly felt the pressure on their revenues, some lowering their guidance and seeing stocks slide. E-learning has become a coping strategy during the crisis.

As of June 2019, there were 232.46 million users of online education in China, according to an August 2019 report by China Internet Network Information Center (CNNIC). Among the biggest players in the market have been Tencent-backed VIPKID and DaDa. Another, e-learning platform, U.S.-listed Youdao Inc. (NYSE: DAO), saw its stock rise about 55% from its level of $16 per share in January to a peak of $29.50 in mid-February. But traditional schools have intensified the competition recently as they began to focus on developing their own online learning platforms.

“The only way for us to service our existing students is to provide tutoring online,” the chief financial officer of OneSmart, Greg Zuo, told CapitalWatch in a comment on the coronavirus outbreak. “Now, our students have become familiar with the online process, and that will increase the adoption rate of online learning.”

OneSmart International Education Group Ltd. (NYSE: ONE) positions itself as a premium afterschool tutoring provider offering one-on-one classes to students in K-12 and especially helps with exam prep. The company has been developing its online learning platform since 2018 and it will stay top priority for the company over the next few years, according to Zuo. The way it has worked prior to the outbreak was students took regular face-to-face classes while taking some online sessions.

In addition, in 2019, OneSmart Online began to cover cities outside of its existing first- and second-tier locations as it aimed to expand its market share. That project, which was about taking the entire education program online, is called offline-merge-online, or OMO. At the end of 2019, the education provider operated 432 centers in 35 cities.

OneSmart is also now using technology powered by artificial intelligence. Zuo said the new technology aims to detect user behavior like facial expressions, accuracy rates, and time needed to complete an assignment. It then adjusts the new material and quizzes to make them more efficient. This addresses the issue of teacher-student understanding in the limitations of online learning, OneSmart’s CFO added.

“Our students have been taking online classes more frequently and their level of satisfaction has been very high,” Zuo said.

He said online learning sessions are priced “almost the same as they pay at a typical offline center.”

This year, COVID-19 led the company to ramp up its efforts in the online sector. Last week, OneSmart closed a private placement of five-year bonds worth $25 million – capital it plans to throw into R&D, and on Friday announced it is acquiring technology from Yimi Education Technology Inc.

Meanwhile, the company expects to see a negative impact on its financials for the period of the outbreak. Similar to the trading curves of other traditional schools, OneSmart’s stock in New York has suffered lately, dropping from trading near $7 per share in early January to below $5 in late February, further weighted by losses it reported for the first fiscal quarter. On Friday, ONE shares closed at $5.41 apiece.

Zuo said brick-and-mortar learning centers are expected to reopen within a month or two. Then, he believes, while most students will return to traditional face-to-face learning, they will also take online courses more than prior to the outbreak. From taking about 10% of China’s education market currently, Zuo said he expects e-learning to take a share of up to 30% in the next three to five years.

“Offline will still be more trusted and reliable for education services. I don’t think online learning is going to be the major format for the foreseeable future,” Zuo told CapitalWatch.

“The value of the premium services has not been fully recognized,” he said. “Highly personalized one-on-one services is the major format of the future, and our business model is well-built to deliver profitable and high-quality services.”