Will China Fulfill Its Commitment to the Private Sector After the COVID-19 Debacle?

From 2005 to 2017, assets of state-owned enterprises grew five-fold, but profits only doubled. 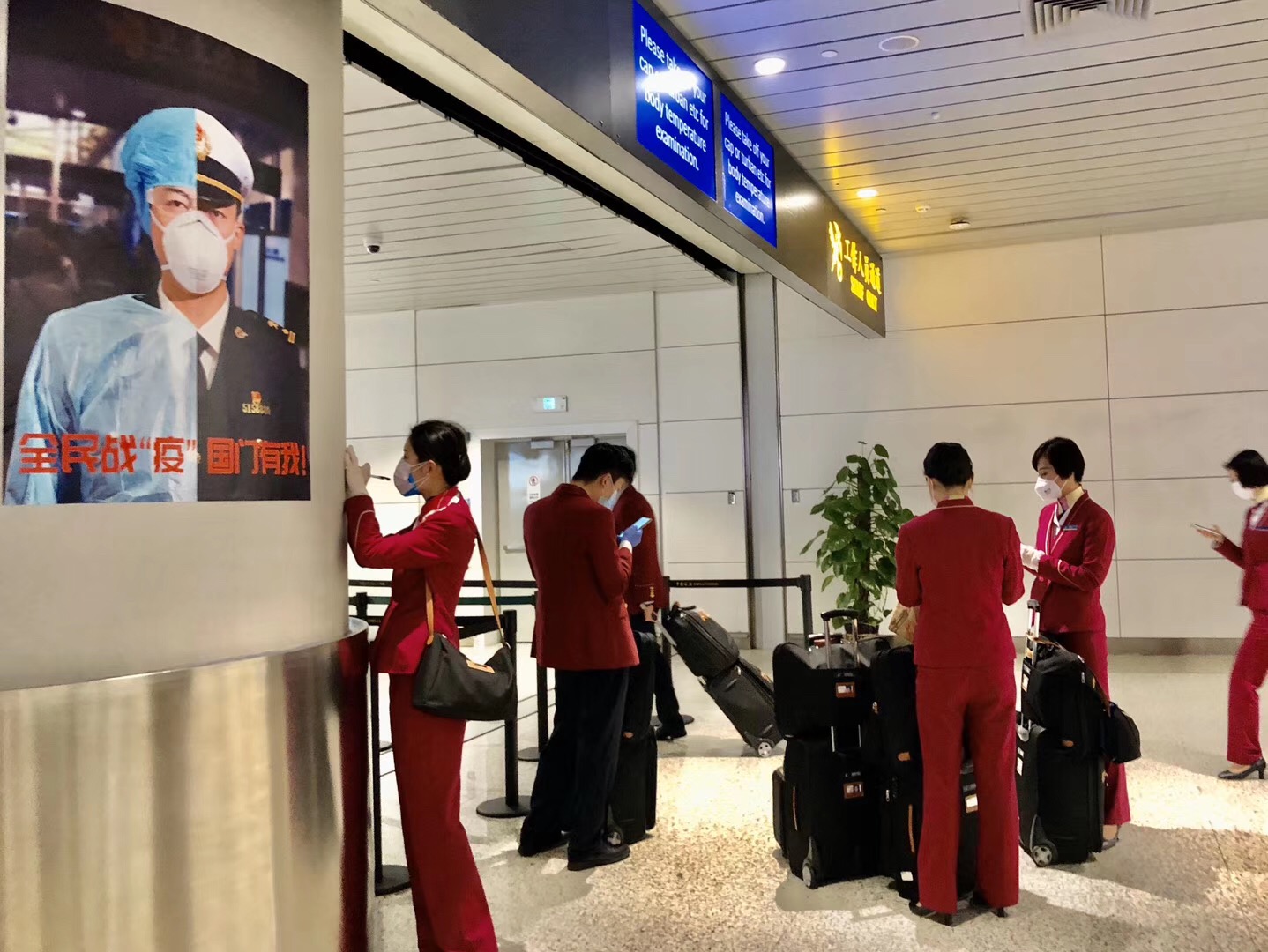 With crushing Wuhan epidemic and ensuing difficulty of resuming work in many parts of China, the U.S.-China trade conflict that dominated the headlines last year seems like past-life memories, even though China and the United States signed the first-phase trade agreement merely a month ago.

The punch of the virus outbreak fell around the Spring Festival, as China was witnessing the largest human migration on earth.  The impact on economy, especially on many small and medium-sized enterprises, cannot be overstated.  As expected, the government will spare no effort in stimulating economic activities through tax incentives, rent reductions and various subsidies, as well as fiscal and monetary policies.

But this is also a critical moment for the government to deliver its stated promise to the private sector.

A nagging "structural" issue of the U.S.-China trade disputes revolves around the incompatibility between American capitalism and "socialism with Chinese characteristics" (or, "state capitalism", according to its U.S. detractors). In the final analysis, it is about the role of government in the overall economy.

Had state-owned enterprises been the right answer to economic growth, they asked, then what's the point of reform?

Nicholas Lardy, Anthony M. Solomon Senior Fellow at the Peterson Institute for International Economics and a specialist of Chinese economy, tries to answer some of these questions in his book The State Strikes Back: The End of Economic Reform in China? (2019).

In a recent panel discussion organized by the China Institute of America in New York City, Lardy said that state-owned enterprises are dragging down China's growth while having a negative impact on annual GDP growth by two percentage points.

Before the end of 2019, Chinese economists engaged in a heated debate about whether the main objective of China's 2020 economic policy should be preserving GDP growth rate at 6%.  In Lardy's view, absent the state sector's advance at the expense of the private sector, China's potential growth rate in the next ten years could well exceed 8%. He believes that advancing the role of private enterprises and strengthening the reform of state-owned enterprises can propel the Chinese economy to the next stage of growth.

The question is whether the Chinese government will follow this advice.  On December 22, 2019, the State Council issued the Opinion on Creating a Better Development Environment to Support the Reform and Development of Private Enterprises, which proposes to optimize the market environment for fair competition and further open up the market access to private enterprises with a series of targeted measures.   But will this be enough to reverse the recent trend?

The State Sector or the Private Sector?

From a policy perspective, in November 2013 the Third Plenary Session of the Eighteenth Central Committee of the Chinese Communist Party proposed to "give the market a decisive role in resource allocation." However, in reality the state industrial policies implemented in recent years have expanded the role of state-owned enterprises. The share of bank loans to state-owned enterprises has more than doubled, and private companies have been squeezed out. 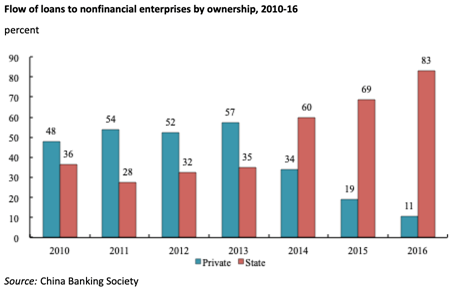 In terms of investment trend, the share of private enterprises began to decline after 2015, a sharp contrast with that of the state-owned enterprises, which had rebounded and increased during the same period.  Although the data used in the chart below are only up to 2016, Lardy observed from other sources that the trend of "the state sector advancing while the private sector retreating" has continued, so much so that by the end of 2017, the contribution of state-owned enterprises to China's industrial output growth rate began to outpace that of private enterprises. 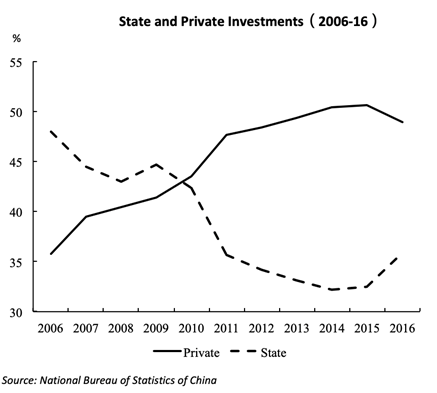 According to data released by the State-owned Assets Supervision and Administration Commission, from 2005 to 2017 the assets of state-owned enterprises grew five-fold, but profits only doubled.  Asset-liability ratio increased from 56.1% to 66.3%, while return on assets decreased from 6% to 2.6%.

In other words, productivity decreased with the increased access to funds.  As credit flew to state-owned enterprises, the profit-creation efficiency was getting lower and lower. 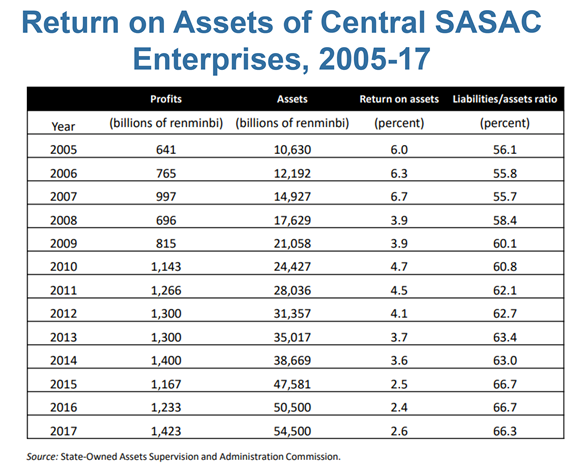 Dorinda Elliott, Director of the Center for Business at the China Institute, asked in the panel discussion whether there had been signs showing changes to the negative trend. For instance, on October 22, Premier Li Keqiang presided over an executive meeting of the State Council that established a market-oriented bond financing mechanism to help alleviate financing difficulties faced by private companies.

Yi Gang, China's Central Bank Governor, wrote in Seeking Truth on December 1, 2019 that, "in view of the financing difficulties and credit contraction faced by small and micro companies, we have focused on market-oriented and law-based framework to effect money policy, promoting credit, bonds, and equity financing, increasing re-lending and rebates to provide long-term stable funds for private enterprises.  We are launching a private company financing system, with both debt and equity. The financial sector has significantly increased its support for small, micro, and private enterprises."

Shang-jin Wei, Wang Professor of Chinese Business and Economy at Columbia University, explained the historical backdrop underpinning the recent trend of "the state sector advancing while the private sector retreating."

The 2007-8 global financial crisis has weakened the credibility of the democratic market economy.  At the time of the financial crisis, China played an important role in sustaining global growth and maintaining economic stability. It also invested heavily in infrastructure to drive economic growth, making Chinese policymakers aware of the efficiency of the state-owned economy in implementing infrastructure projects. This gave the Chinese government greater confidence in the stability of its own financial system as officials are wary of repeating the "mistakes" of Western open markets.

Elliott was a former editor and communications director of the Paulson Institute.  She quoted a line from China's Vice President Wang Qishan to Henry Paulson, former U.S. Treasury Secretary overseeing the financial crisis, that "we have been listening like students for a long time, but now we find our teacher has problems. "

Lardy observed that although President Xi Jinping met with private entrepreneurs in 2018, the overall direction has not changed much: banks are still reluctant to lend money to private enterprises because state-owned enterprises enjoy implicit state guarantees.

Wei explained that 80% of the non-performing assets on the books came from private companies, so banks were unwilling to lend to them based on realistic considerations.  Lardy argued that the profits produced by private enterprises are three times that of state-owned enterprises, but they have higher "non-performing assets." This clearly indicates that the state-owned companies are afforded preferential treatments at the expense of their private counterparts.

Lardy believed that (even before the impact of COVID-19) the most important factor leading to China's current economic downturn is problematic resource allocation and reduction in credit.  Figures show that China's exports have been basically flat, but under the previously implemented deleveraging policy, China's credit growth rate had decreased by one-third. For the first time, the ratio of credit to GDP did not increase in 2018, showing the determination of policy makers.

But private companies need to rely more on shadow banks when credit growth stops. Due to insufficient supervision of shadow banking, this in turn has created more systemic risks.

Speaking of China's innovation economy, Lardy referred to a benchmark used by many economists: "total factor productivity" (TFP), namely, the ratio of total output (such as GDP) to total input. From the early 1980s to the global financial crisis, China had a very high TFP growth, but only 10% attributable to labor force expansion.  More growth was attributable to productivity increases, innovation drivers and labor optimization.

However, in the past 10 years, China's TFP has gradually decreased, which is clearly departing from the previous trend. According to the International Monetary Fund, since the global financial crisis, China's average annual TFP growth rate has been 2.25%, only half of the average during the ten years leading to the crisis. In fact, the decline in TFP can explain most of the decline in GDP growth in recent years.

Lardy believed that this is most likely a result of the state-owned economy regaining favor and receiving more resources again. Yet, most of the innovation comes from the private sector. When private enterprises are squeezed, the growth rate of the overall TFP is also reduced.  This is part and parcel of the "state sector advancing while private sector retreating" phenomenon.

In an article for the state-run People's Daily on November 22, titled "Insisting and Improving of the Basic Socialist Economic System," Vice Premier Liu He articulated the government's unwavering support for both the state-owned economy and the private sector.

In private conversations, however, many private business owners questioned how the government would "strengthen and expand state-owned capital" and "deepen the reform of state-owned enterprises", while simultaneously "exploring multiple forms of realizing public ownership, and encouraging mixed ownerships by state-owned capital, collectively-owned capital and private capital."  What will this entail for the private sector?

I asked Lardy how he would interpret Liu He's writing.  Lardy believed that "competitive neutrality" should be the key, that is, making state-owned enterprises and private enterprises compete on a level playing field.

The State Council Opinion cited earlier attempts to give private entrepreneurs confidence and affirms the important role of the private economy.  Emphasis is placed on optimizing the market environment for fair competition, removing hidden barriers that restrict private enterprises from participating in market competition, and eliminating unequal treatment in terms of access permits, operations and bidding.

But what role should the government play in the economy?  Recently this has also become a subject of debates among American economists, with some criticizing the shortfalls of capitalism.  Some scholars even advance the view that the U.S. government should adopt an "eye for an eye" strategy to spearhead economic programs in order to counter China's "state capitalism."

But economist Thomas Philippon argues in his new book The Great Reversal: How the United States Gave Up on Free Markets (2019) that many of the key problems of the American economy are neither caused by the flaws of capitalism nor necessitated by globalization, but instead due to concentration of corporate power.  By lobbying against competition, the largest companies increase their profits while lowering wages and limiting opportunities for investments, innovation and growth.

Nobel laureate economist Joseph Stiglitz also warns in his new book People, Power, and Profits: Progressive Capitalism in the Age of Discontent that the U.S. economy and government are leaning toward oligarchy, and a few companies have dominated the market. The financial industry has managed to make its own rules, technology companies have accumulated a large amount of personal data with very little supervision, and too many people have created wealth by exploiting others, thereby exacerbating inequality and slow growth. This book propounds how governments can play a new role under "progressive capitalism," ensuring that markets will serve society, not the other way around.

In the near future, the prevention and control of the COVID-19 will inevitably increase the role of the Chinese government in society and economic operations; however, once the epidemic is effectively contained, in the long run, the government should focus on supporting fundamental natural science and social science research, in addition to promoting the reorganization of public health and basic medical facilities.

Most importantly, Chinese government should encourage private enterprises to actively participate in the market-oriented reform.  Investors will be smart to observe whether it delivers its promise.

An earlier version of this article appears in the Financial Times Chinese Edition. 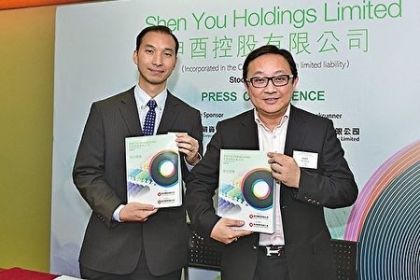 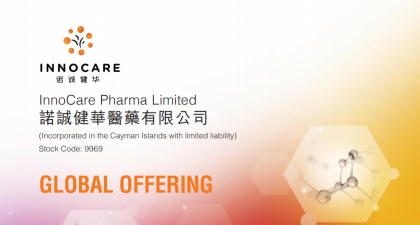 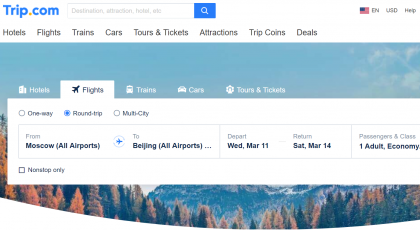 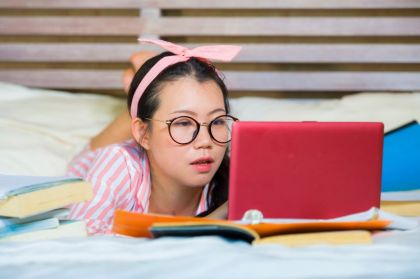 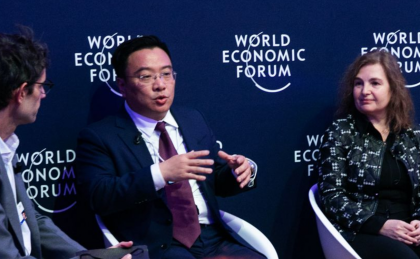