These stocks were supposed to be gems of the New Silk Road. Most have either traded sideways or declined. A look at China's Belt and Road initiative today, where it's going and what it means for investors. 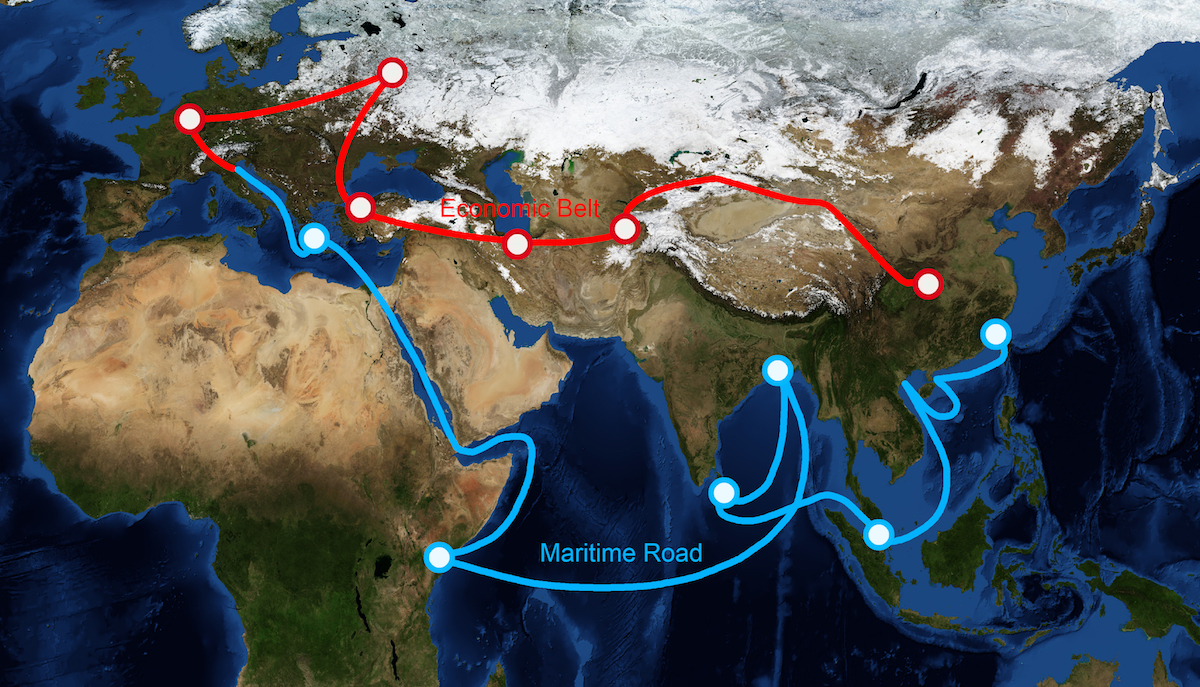 By Land, by Digital and by Xi

The Belt and Road initiative, monikered as the “New Silk Road” is the largest, most expensive and expansive signature foreign policy initiative of the Chinese government in this century. To call the project “ambitious” isn’t to do its scale justice. The BRI is an attempt, at its heart, to create a vast network of trade channels by land, sea, and digital that builds a “New Silk Road”, and once again placing China at the heart of global trade. The BRI was announced by China’s President Xi Jinping in October 2013 during visits to Kazakhstan and Indonesia. The “belt” in the BRI refers to roads and land routes while the “road” in the BRI refers to sea lanes.

In Xi’s own words, the BRI  is:  “…a win-win initiative that calls for the participation of all nations based on the principles of extensive consultation, joint cooperation, and shared benefits in the aim of achieving common prosperity. The Belt and Road initiative is not a private path owned by a certain party, but a sunshine boulevard shared by all.”

Well, where there is investment there is also debt, and many developing countries, while they stand to benefit in some ways, have been and will be saddled with it. Despite the high-minded language, the BRI does not seem to be either a Marshall Plan not naked imperialism—but perhaps a middle road.

How Long and Expensive Will This Belt / Road Be?

The project has a targeted completion date of 2049, which is the 100th anniversary of the People's Republic of China. HSBC estimates that Belt and Road development projects will cost up to $6 trillion in the next 15 years, while PricewaterhouseCoopers estimates the costs at $5 trillion (2018).Morgan Stanley has predicted China’s overall expenses over the life of the BRI would be $1.2-1.3 trillion by 2027.  “These factors reinforce our view that China’s investment in B&R countries will increase by 14% annually over the next two years, and the total investment amount could double to $1.2-1.3 trillion by 2027,” Robin Xing, Morgan Stanley’s Chief China Economist.

A Bumpy Road for BRI Stocks

In May 2017, Barron’s predicted a number of Chinese locomotive stocks to fare well in the markets due to the global influence of the BRI. At the time, ratings agency Fitch said $900 billion worth of projects were planned or underway. China was also planning to pump $150 billion into projects each year.

Since then, most stocks that Barron’s predicated to do well ended up as losers. Some of that is due to the coronavirus epidemic, which has been affecting the overall volatility of the markets and the trade war, which began in the middle of 2018. Add that to the coronavirus outbreak, and most of the stocks that were supposedly going to benefit from the Belt and Road Initiative, have shareholders tightening their belts and closing their wallets.

Construction, logistics, and railway companies are the obvious players in the BRI, as China looks to wrap the entire Eastern hemisphere in a belt, with Beijing as its buckle.

One of the biggest losers that Barron’s picked to win was construction and equipment maker, Sinopec Engineering (Group) Co., Ltd. (HKEX: 2386) In the month of the report, shares of Sinopec hit a high of HK$6.85 per share and received some appreciation by rising as high as HK$8.21 apiece in February 2019. However, this month with the concerns over the coronavirus, Sinopec fell to a six-year low of HK$4.14 per ADS.

Although locomotives manufacturer CRRC Corp. Ltd. (HKEX: 1766) didn’t hit the historic lows as some others, it is still a notable loser from the Barron’s report. After hitting a high of HK$7.58 per share in May 2017, CRRC has fallen to a low of HK$5.01 per share this month.

Not impacted by the concern of the coronavirus, some wall street listed U.S.-based locomotive companies have seen some positive movement over the past two years. One is railroad giant Union Pacific Corporation. (NYSE: UNP) The company, which was founded by Abraham Lincoln in 1862 when he signed the Pacific Railway Act, ended May 2017 trading at $110.30 per share and has soared to a high of $187.67 apiece this month.

Despite most companies shares slipping to their lowest point in years, Barron’s was right about one stock to receive positive appreciation and that was specialty vehicle and bonded logistics provider SinoTruk (Hong Kong) Ltd. (HKEX: 3808) After ending May 2017 trading at HK$4.80 per share, SinoTruk has traded as high as HK$23.15 per share. This month it has hit a high of HK$15.40 per share and a low of HK$13.26 per share. In the six months through June, SinoTruk reported revenue of $4.9 billion million and gross profit of $960.2 million

Rail-based freight transportation company CSX Corp. (Nasdaq: CSX) opened trading May 2017 at $50.87 per share but has skyrocketed since then to a high of $80.09 apiece this week. That marks a six-month high for CSX.

The sea "roads" China is building and plans to build span oceans. Ports are being constructed or improved from Sri Lanka to Greece, from Belgium to Brunei. Of all the sea-going companies that stand to benefit from the BRI, shipping giant COSCO Shipping Holdings Co., Ltd. (OTC: CICOY; HKEX 1919) COSCO Shipping, which has invested $8.2 billion towards the BRI, became the third largest container carrier after it  acquired Hong Kong-based Orient Overseas Container Line jointly with Shanghai International Port Group, for $6.3 billion in July 2018.

However, its current position in the stock market does not reflect COSCO Shipping. This month, COSCO shipping fell to 120 day low of HK $2.72 per share. That’s down from its HK$3.59 per share that it closed trading May 2017 at.

Another big shipping winner -not as much in stock performance as in revenues--is China Merchants Energy Shipping Co., Ltd., (SS: 601872) which saw profits double in 2018. A big beneficiary of the BRI, the company controls the port in Hambonota, Sri Lanka. It is also designed to host oil tankers traveling from the Middle East and to China. After the company’s stock was sent up as high as 8.56 yuan per share thanks to the principal trade agreement, fears of the coronavirus caused its stock to fall as low as 5.11 yuan per share in February.

A Chinese logistics solutions provider, Best Inc. (NYSE: BEST) has seen its shares tumble over the last couple of years. Best first made its debut in September 2017, raising $450 million in its IPO. However, Best has traded well under its issuance price of $10.00 per American depositary share. In February, Best has traded as low as $5.20 per ADS.

During the coronavirus epidemic, Best donated thousands of supplies and has provided free delivery services. In November, Best told CapitalWatch it was planning to take a larger share of the logistics market in Southeast Asia by expanding its cross-border business to Malaysia, Cambodia and Indonesia.

Chinese digital giants have been exploring the potential market in BRI countries. The Digital Silk Road alone was estimated to involve nearly $200 billion worth of investments, according to Deloitte’s BRI report in 2019.

Chinese 5G giant Huawei Technologies benefited from the BRI investment, despite its smartphone shipment plummeting 7% in the fourth quarter in 2019 compared to the same period in the prior year. The company launched its Mate 30 series in BRI countries including Malaysia and Singapore in the fourth quarter.

Apart from the hardware manufacturers, China-backed and Norway-headquartered software company, Opera Ltd. (Nasdaq: OPRA) operates in Ireland, Russia, and BRI countries in Africa. The stock price of the company was cut in half since its IPO from $14.34 per ADS on July 27 in 2018 to $7.17 per ADS Wednesday

China’s e-commerce giant JD.com Inc. (Nasdaq: JD) said that on its platform that the number of orders from international customers in BRI countries increased by more than fivefold in 2018 compared to 2016.

Among the 30 countries with the largest increase in online purchases in China in 2018, In terms of top consumers, Asian and European countries ranked amongst the top.  That includes Russia, Vietnam, Israel, South Korea, Hungary, Italy, Bulgaria and Poland.

Shares in Chinese cross-border e-commerce giants listed in New York and Hong Kong have been soaring since 2013.

Not all the cross-border e-commerce companies win the game of BRI. Small players like LightInTheBox Holding Co. Ltd.  (NYSE: LITB) is losing its shareholder value due to competition.

Shares in the Beijing-based cross-border e-commerce company dropped from $23.38 per ADS in 2013 to $1.02 per ADS on Wednesday. It even faced a possible delisting after receiving warning from the New York Stock Exchange for not meeting the $1 per ADS minimum trading requirement. However, LightInTheBox is on track to regain compliance with the NYSE after exceeding closing at least $1 per ADS for over a month.

LightInTheBox sells to more than 140 countries and regions according to its website. That includes BRI countries like Singapore, Malaysia, Indonesia, Thailand, and Pakistan.

The Future of BRI Its Future Winning Stocks

Make no mistake, the BRI is China’s 100 year project, one that will continue to grow and morph even well after it is “completed”. The scale of this endeavor is unimaginably vast and ambitious and will encompass tens of countries, thousands of miles, and billions of people, and trillions of dollars. Some companies will win; some will lose. That will also be true for some investors, national governments and regular people on the ground.