Canaan has applied to list on the Nasdaq Global Select Market under the symbol “CAN.” The bitcoin mining machine maker, based in Hangzhou, said in its prospectus on Monday that it plans to list on the Nasdaq Global Select Market under the symbol “CAN”.

Formally knCaown as Canaan Creative Information Technology Co., Ltd., the company changed its name in 2018. Since 2013, Canaan operates as the second largest designer and maker of Bitcoin mining machines globally, the filing said. Canaan has also become the world’s leading supplier of AI & blockchain chips and system solutions, according to its website. 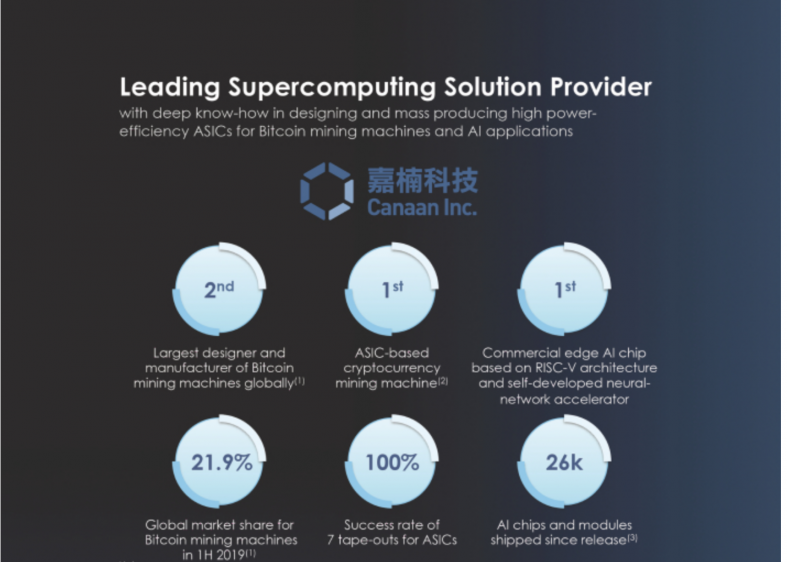 A year ago, Cannan unveiled the world’s first 7nm mining chip at a press conference in Hangzhou.

The IC global market size was $401.6 billion in 2018, Canaan cited a research report from Frost & Sullivan in its prospectus. The industry has sustained growth, particularly in the fabless IC design sector, as sales revenue soared to $38.5 billion in 2018, facing a compound annual growth rate (CAGR) of 26% from 2014, the report said. The IC design industry projects to reach $79.4 billion in 2023., representing CAGR of 16% .

Revenue in six months through June plummeted to $42.1 million, down 85% year-over-year. Canaan also suffered a net loss of $48.2 million, in contrast to a net income of $32.8 million. Canaan attributed the poor revenue performance to a decline in the average selling price of its Bitcoin mining machines on a per Thash basis, the company said in its filling.

The proceeds from the IPO will go towards research and development for, AI algorithms and applications, along with blockchain algorithms and applications. Another round will towards the expansion of AI and blockchain business globally, supply chain optimization, repayment of debts in its reorganization, and other general corporate purposes, according to the prospectus.