The education provider said it enjoyed a 19 percent increase in the number of students in the second quarter, which fueled revenue growth. 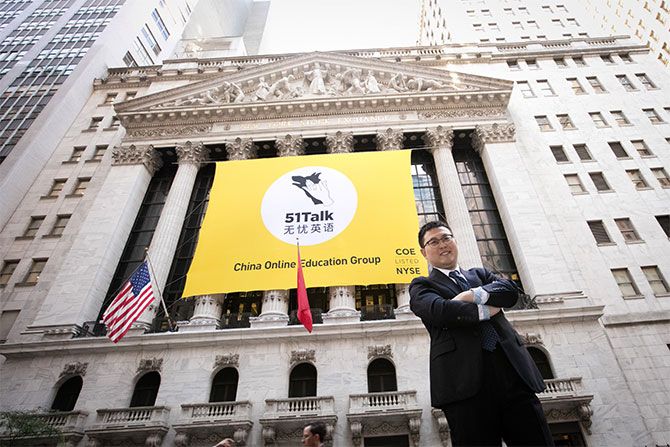 The stock in China Online Education Group (NYSE: COE) skyrocketed 23 percent, to $7.21 per share by Wednesday afternoon, after the company reported strong revenue results and a narrowed loss for the second quarter.

The online education company, known as 51Talk, specializes in English lessons across China. In a statement today, 51Talk reported that in the three months through June its revenue reached $51.5 million, up 25 percent year-over-year. Losses, meanwhile, narrowed to $4.7 million, or 23 cents per American depositary share, 56 percent down from a year ago.

Jack Jiajia Huang, the founder, chairman and chief executive officer of 51Talk, said along with the revenues, one-on-one gross billings exceeded the company's expectations in the second quarter, which reached $59.7 million, up 50 percent year-over-year.

"I am very proud to share that we successfully delivered over 90 million one-on-one online English lessons, which also include free trial lessons, from our inception in 2011 through the end of August this year," Huang said in a statement on Wednesday.

Huang noted the progress that 51Talk has had in the K-12 market, which has become the company's focus in March 2018. At the time, 51Talk changed its branding approach, including its logo and mascot, to appeal to the younger age group.

Min Xu, the chief financial officer of 51Talk, said the company has been focused on growth in the tiers below the first in China and was confident will see improved profitability in the second half of 2019, according to the statement on Wednesday.

Looking ahead to the third quarter, the company said it expects to generate revenue in the range of between $56.4 million and $57.1 million, representing a year-over-year increase of between 30 and 32 percent, respectively.