9F is one of the larger players in the Chinese online peer-to-peer lending industry and is transitioning to focus more on wealth management, insurance and related financial services.

9F (JFU) has filed to raise $76 million from the sale of ADSs in a U.S. IPO, according to an amended F-1/A registration statement.

9F is in the midst of transitioning toward a more balanced business and revenue model by providing a variety of financial services for loans, wealth management, and insurance.

Beijing, China-based 9F was founded in 2006 to develop a P2P digital lending platform in China.

Management is headed by founder and CEO Lei Sun, who was previously a senior manager at the head office of China Minsheng Bank (HKEX:1988).

The firm's offerings are delivered through One Card, around which JFU has built an ecosystem that connects borrowers, investors, financial institution partners, and merchant partners as shown below: 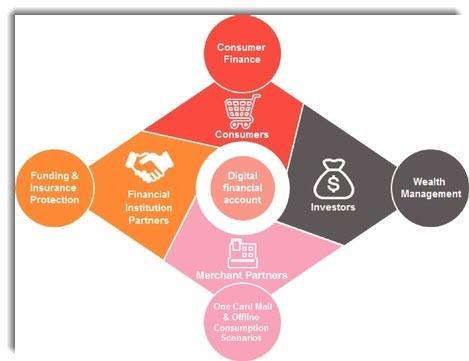 Once users get their credit limits approved, they can use the money for purchasing products of the company's strategic partners, including China UnionPay that has connected more than three million merchants, and from the firm's One Card Mall, an online shopping platform.

Management states that, according to Oliver Wyman, 9F is the largest online consumer finance platform among the independent marketplace lending platforms in China in terms of outstanding loan balances as of Dec. 31, 2018.

9F additionally complements its loan products with various online wealth management products, including a suite of solutions to meet the evolving needs of investors as they grow, including fixed income, stock, insurance as well as mutual fund products.

Fixed income products account for a significant portion of the firm's online wealth management operations and is delivered through offshore and onshore platforms ‘Wukong Licai', ‘9F Wallet' and ‘9F Benben', as well as various other platforms such as ‘CSJ Golden Bull', a leading fund rating and distribution platform in China in which 9F is a major shareholder.

Despite the demand, only 28 percent of consumers in China possess credit ratings of any kind, as compared to 86 percent of the U.S.

According to another market research report by the Boston Consulting Group and Lufax, China had around $2 trillion in online wealth management (OWM) in 2017 while the Chinese OWM market had reached $6 trillion with an online sales penetration rate of 34.6 percent, as of the end of Q1 2018.

The major factor driving market growth is the use of technology by FinTech companies in OWM services.

The independent third-party internet wealth management segment has a penetration rate of only 10 percent, as compared to 35 percent in the U.S.

9F's recent financial results can be summarized as follows:

9F intends to sell 6.75 million shares of ADSs and selling shareholders will sell 2.15 million ADSs at a midpoint price of $8.50 per share for gross proceeds of approximately $75.65 million, not including the sale of customary underwriter options.

Class B shareholders will be entitled to five votes per share versus one vote for Class A shareholders.

The S&P 500 Index no longer admits firms with multiple classes of stock into its index.

Assuming a successful IPO at the midpoint of the proposed price range, the company's enterprise value at IPO would approximate $893 million.

9F is attempting to raise U.S. public capital as a bridge to transition its business model away from peer-to-peer lending toward wealth management and insurance services.

In the ‘Recent Developments' section of the current IPO registration, management has detailed a drop in net revenues in the first five months of 2019 of 36.9 percent as a result of a contraction of its loan facilitation services. The number of active borrowers decreased from 1.5 million to 900,000, a 40 percent decrease.

Credit Suisse is the lead left underwriter and IPOs led by the firm over the last 12-month period have generated an average return of a negative 1.2 percent since their IPO. This is a lower-tier performance for all major underwriters during the period.

Other peer-to-peer financial services marketplaces have floated their shares on U.S. markets in recent years and they have struggled under the weight of Chinese regulator pressure on the industry.

Management has done well to contend with the negative effects of the Chinese regulatory crackdown on the peer-to-peer lending industry in general.

9F is one of the larger players in the market, so will likely have the ability to make the necessary adjustments to its operations given the new regulatory environment.

But those adjustments will take some time to put into place, so prospective investors should be judicious about their choice of stocks to own in the uncertain financial marketplace industry in China over the near-term.