OneSmart International Education Group continues to expand its footprint into Tier 2 and Tier 3 cities within China even as it faces a challenging domestic economic and regulatory environment.

OneSmart International Education Group (Nasdaq: ONE) has reported financial results for its fiscal second quarter of 2019.

ONE has had a challenging period over the past five quarters but intends to continue its expansion initiatives into Tier 2 and Tier 3 cities.

Shanghai-based OneSmart was founded in 2008 to address the additional education needs of K-12 children for families in the affluent and 'mass affluent' demographics.

Management is headed by Chairman and CEO Xi Zhang, who was previously associate director of strategic planning at Johnson & Johnson Medical International and marketing manager at Wrigley China.

OneSmart has created what it calls 'the largest premium K-12 after-school education service provider in China in terms of revenue in 2016 and 2017, according to Frost & Sullivan.'

In addition, the firm says it has a national market share of 2.4% and it operates a nationwide network of 225 'study centers' in 42 cities within China.

Since ONE operates study centers in numerous cities, its customer acquisition efforts tend to be localized to each city.

Although the firm considers itself a 'nationwide' service provider, the country of China is so vast that it is forced to market to individual cities.

Management says that it has been able to command higher prices for its educational offerings due to its leading position in various markets in which it operates.

The firm also highlighted its full 'suite' of offerings which enables them to cross-sell other courses within their portfolio to existing students.

According to a 2017 report by DBS Vickers Securities (PDF), it forecasted overall education spending market in China to grow by a CAGR 6.7% 'in the foreseeable future due to multiple drivers:'

The group expects the total market value for education and training to reach $474 billion by 2025, with the K-12 sector accounting for most of the demand.

Looking historically, the chart below shows the tremendous rise in education spending by households along with spending growth: 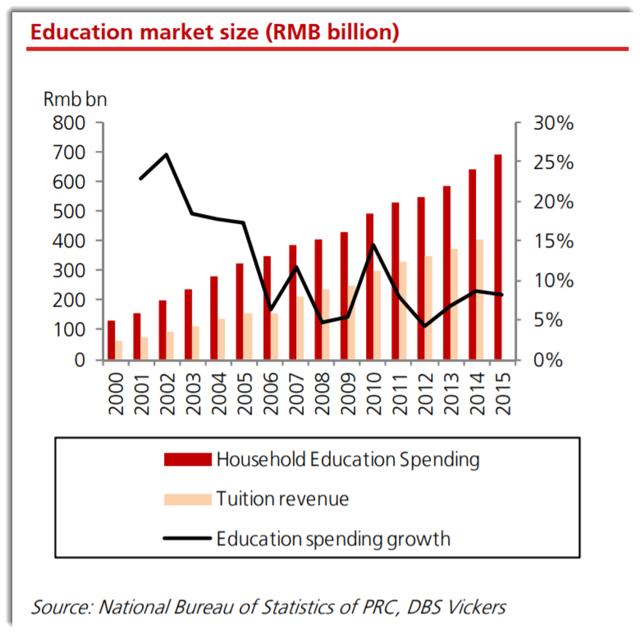 Management says that its services are subject to intense competitive pressures as well as from a shifting regulatory environment as the Chinese government, both at the national and provincial levels has been increasing its oversight and regulatory footprint within the education sector.

ONE’s topline revenue by quarter has been growing, albeit unevenly, since its IPO in early 2018, as the chart shows below: 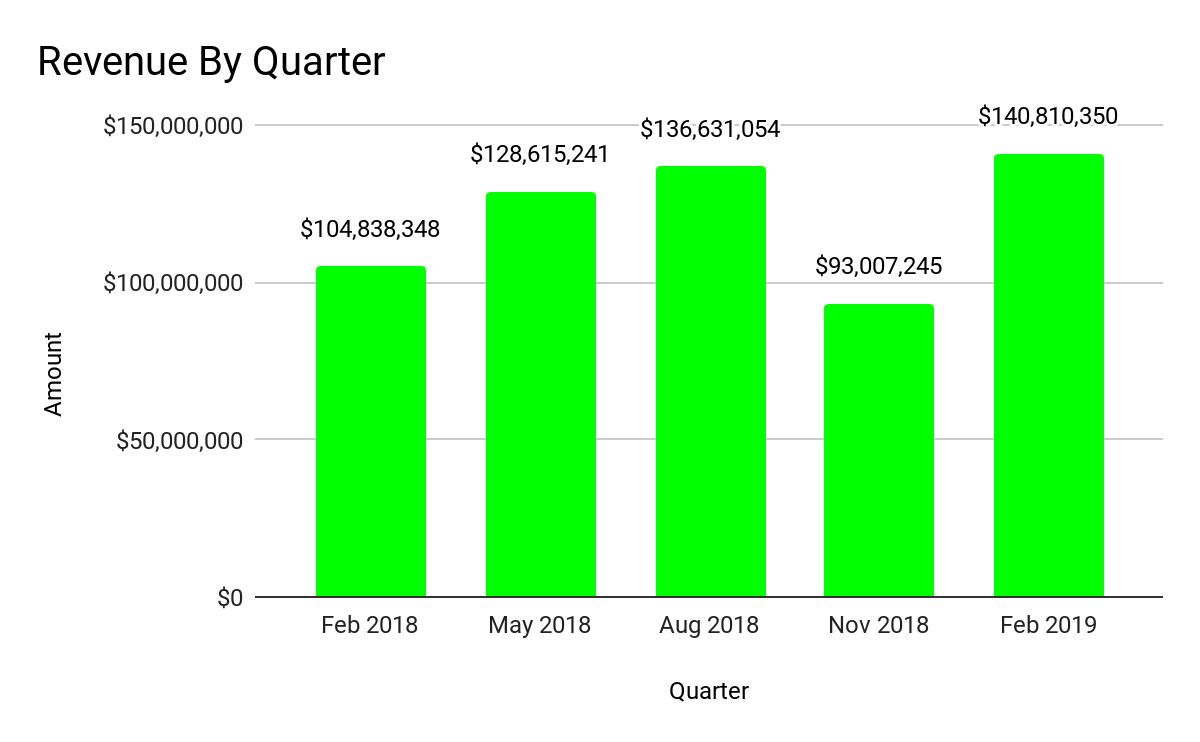 Gross profit has been similarly uneven over the past five-quarter period: 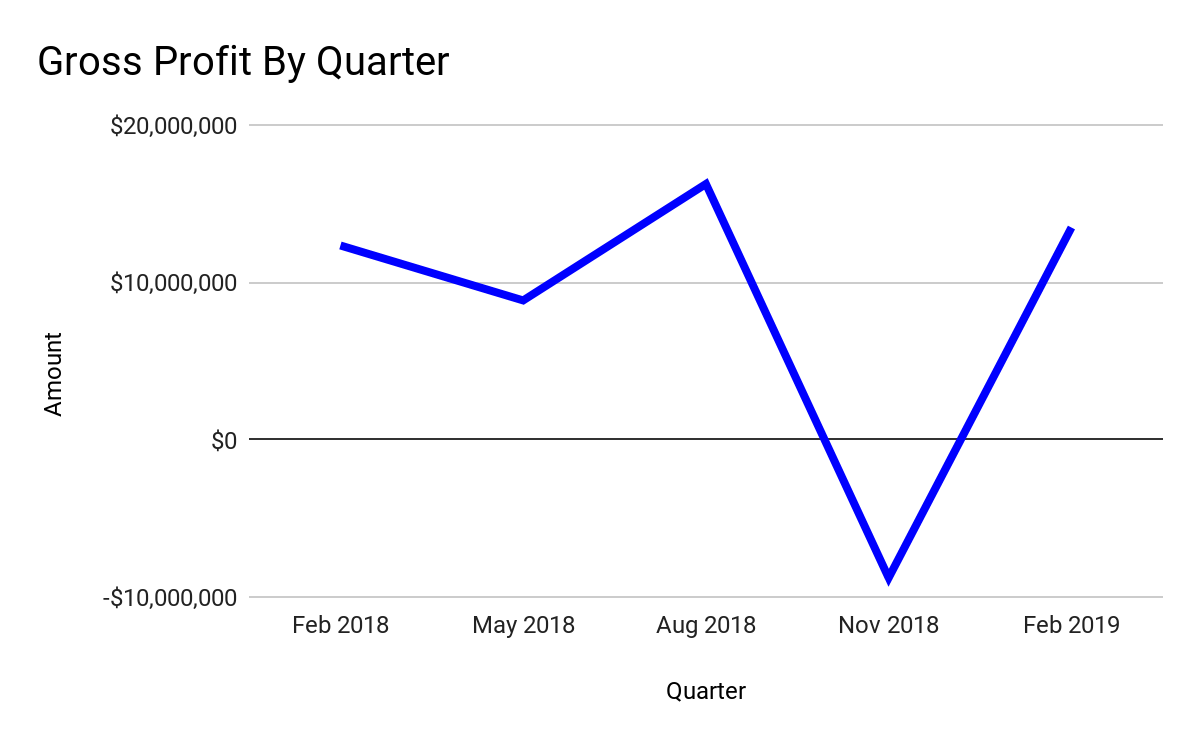 Earnings per share (Diluted) returned to positive territory in the most recent reporting period: 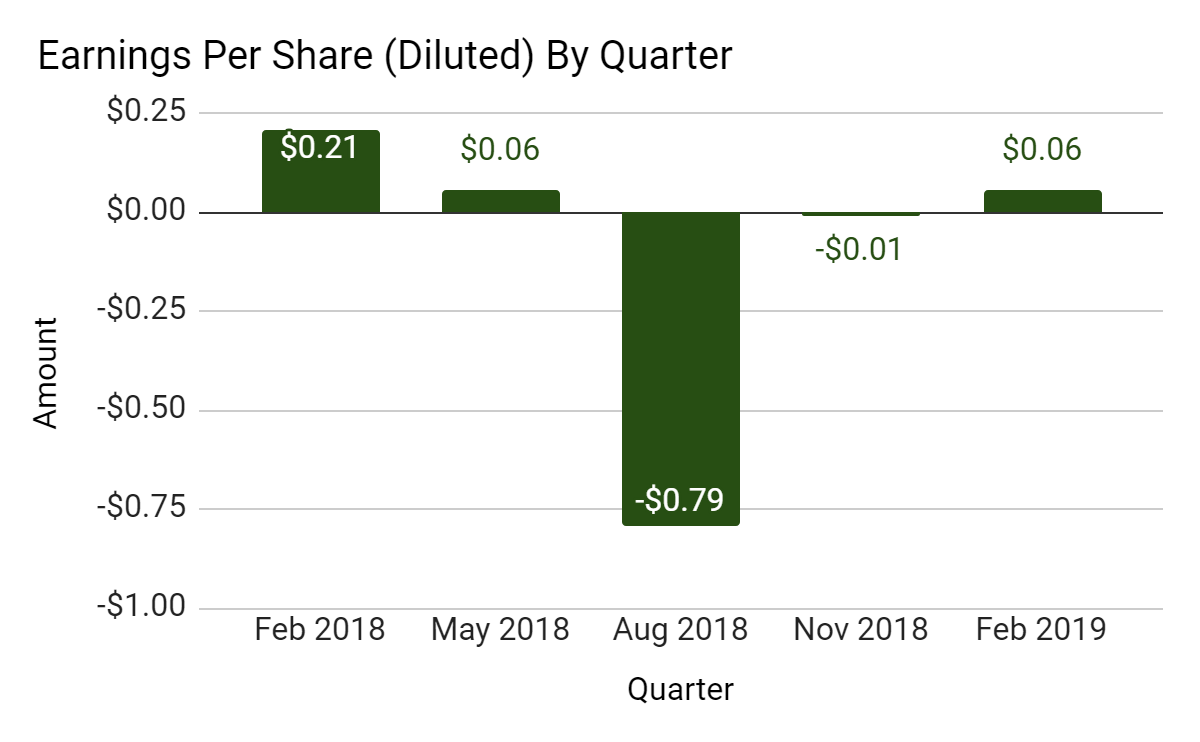 In the past 12 months, ONE’s stock price has dropped 41.6 percent vs. RYB Education’s drop of 64.7 percent, as the chart below indicates:

OneSmart’s stock has had a difficult year as the firm has faced economic headwinds as well as regulatory setbacks.

In its most recent earnings call, management has explained that its additional expenses have been associated with opening 128 new learning centers in China, so the firm continues to expand its operations at a significant pace.

While ONE expands its footprint into Tier 2 and Tier 3 cities, management will have the challenge of maintaining quality control and cost discipline as it broadens its footprint.

Topics:ANALYSIS: OneSmart Expands Growth Initiatives With Broader Footprint
READ MORE
COMMENTS0 comments
Sign in
We reserve the right to remove any content at any time from this Community, including without limitation if it violates the Community Standards.
SUBSCRIBERS ONLY
MOST READ
LATEST NEWS
HOME
CHINA STOCKS
U.S. STOCKS
COMMENTARY
INVESTOR RELATIONS
INVESTIGATIVE RESEARCH REPORT
ABOUT US