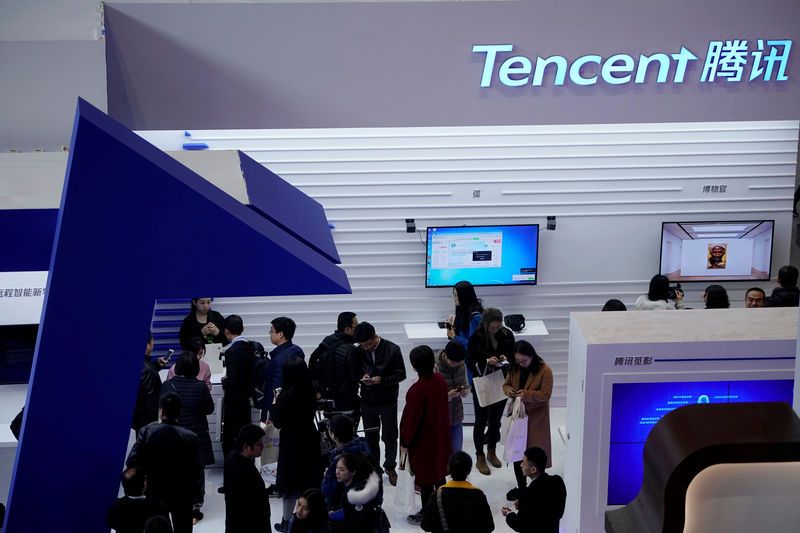 HONG KONG (Reuters) - Tencent Holdings Ltd posted record quarterly profit on Wednesday, smashing market expectations, as the social media and gaming giant booked a rise in the value of its investments while fintech and cloud revenues helped make up for declines in games.

Even so, revenue grew at its slowest-ever rate, as heightened regulatory scrutiny hobbled its gaming operations. That allowed earnings from its nascent financial technology (fintech) and business services to eclipse smartphone games for the first time.

Boosting profit was a 46% rise in "net other gains", such as from investments, to 11.1 billion yuan. Revenue, however, came in just shy of analyst estimates at 85.5 billion yuan, with growth at an all-time low of 16%.

Tencent has been hit by a suspension in the approval of new games by China's internet regulator for most of last year, which led to the company posting its sharpest-ever profit drop in the three months through December, and the slowest annual profit growth in 13 years.

Tencent, which is seeking to find new revenues by shifting to industrial services, in September reorganised its business and created a Cloud and Smart Industries Group (CSIG).

"FinTech and Business Services", a category disclosed for the first time and which includes payment and cloud services, generated 21.8 billion yuan in the March quarter, up 44 percent.

That was more than smartphone gaming revenue, traditionally Tencent's largest single revenue generator and still the most lucrative business, which fell 2% to 21.2 billion yuan due to fewer new titles.

But president Martin Lau said on an earnings call that its nascent industrial internet business was still loss-making and needed more investment in capital and headcount.

The firm also said it would release several games in the second quarter and is "in the early stages of experimenting" with season passes for some of its main titles in China after a positive reception for passes in overseas markets.

Tencent waited in vain for over a year for approval to earn money via in-app purchases on its popular game PUBG Mobile. It pulled the game last week and launched approved title "Peacekeeper Elite", also known as Game for Peace, a tactical tournament game similar to PUBG but with a socialist makeover.

Elsewhere, Tencent appears to be taking a hit from a slowing Chinese economy amid a China-U.S. trade war. Its online advertising revenue grew 25% versus 55% in the same period a year earlier, with Tencent blaming a "challenging macro environment" and high comparison base.

Mitchell said advertising spending from sectors such as automobile, real estate and internet services had dropped, but that Tencent would not aggressively release more advertisement space at the cost of user experience.