Asia Times has filed for a small, &quot;best efforts&quot; U.S. IPO. The tiny firm is profitable and growing, but the IPO is pricey.

Asia Times (Nasdaq: ATIF) has filed to raise gross proceeds of up to $20 million from a ‘best efforts’ U.S. IPO, per an F-1/A registration statement.

The firm provides financial consulting services to companies in China seeking to list their company stock on public exchanges.

ATIF is a profitable but very small firm. Management has placed a high valuation on the IPO requiring perfect execution to justify its high price.

Shenzhen, China-based Asia Times was founded in 2015 to provide small and medium-sized enterprises in China financial consulting services to enable them to go public on OTC markets and exchanges in the US, mainland China, and Hong Kong exchanges through its variable interest entity Qianhai Asia Times International Financial Services.

Management is led by President, CEO and Chairman Qiuli Wang, who has been with the firm since 2018 and was previously CEO at Shenzhen Haorong Guarantee.

In August 2018, Asia Times launched a financial consulting service in Shenzhen named AT Consulting Center and in September 2018, the company acquired CNNM, a China-based outlet providing financial news and information.

The firm plans to expand its offerings to other Asian countries by the year 2020, including Malaysia, Vietnam, and Singapore.

The company markets its services through sales and marketing campaigns and existing customer referrals as well as through online social media channels such as WeChat or Weibo.

Sales and marketing expenses as a percentage of revenue have been dropping as revenues have increased, per the table below:

According to a 2017 market research report by Consultancy Asia, the China management consulting market grew from about $3.5 billion in 2013 to $4.5 billion in 2016, posting a 12 percent year-over-year growth.

The China management consulting market was projected to grow to $5.4 billion in 2017 as can be seen in the chart below: 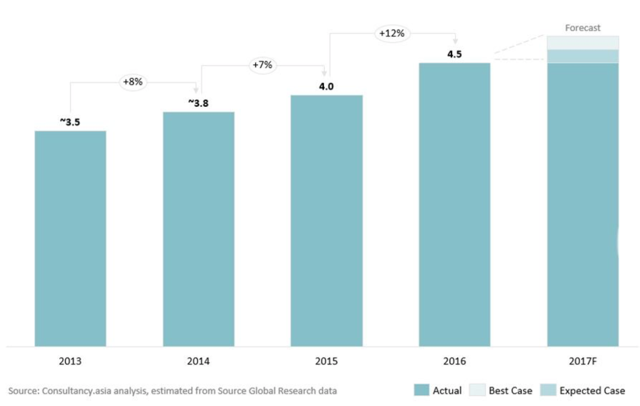 China’s consulting market grew at the fastest rate of 12 percent in 2016 and has room to grow further, as the following graphic highlights: 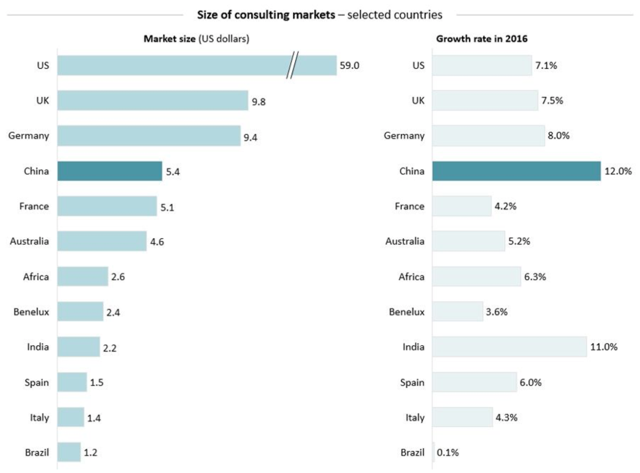 Management believes that Asia Times offers a full suite of services that cover all stages of a company’s process of going public and that differentiates it from its competitors who outsource a majority of the work to third-party service providers.

ATIF’s recent financial results can be summarized as follows:

Below are relevant financial metrics derived from the firm’s registration statement:

ATIF has filed to raise up to $20.0 million in gross proceeds from a ‘best efforts’ IPO of its common stock, excluding customary underwriter options.

It is unusual that management has chosen not to provide for the sale to U.S.-based investors of ADSs, which is typical for a foreign registered firm going public on U.S. markets.

At IPO, the company’s enterprise value would approximate $220 million.

Per the firm’s latest filing, it plans to use the net proceeds from the IPO as follows:

The sole listed underwriter of the IPO is Boustead Securities.

Below is a table of relevant capitalization and valuation metrics for the firm:

ATIF is a small consulting firm that wants to access U.S. capital to expand its business of helping Chinese companies list on various capital markets.

Management has expanded its original focus from U.S. markets to mainland China and Hong Kong.

ATIF’s financials show topline revenue growth, profits, and positive cash flow, which are all to the good. Selling expenses have dropped as revenues have increased.

Going forward, the market opportunity for consulting with Chinese companies to go public in the U.S. is unknown. IPO markets tend to be sporadic and highly sensitive to overall market volatility, leading me to question the consistency of its revenue generation model over time.

Boustead is the sole underwriter for the IPO. There is no data on the firm for the past 12 months and Boustead is not a significant player in the U.S. IPO space.

It is likely ATIF selected the firm as few other firms will handle small, ‘best efforts’ IPOs and Boustead appears to be developing a niche by seeking to underwrite Chinese firms to U.S. markets.

Like many Chinese firms wanting to tap U.S. markets, the firm operates within a VIE structure or Variable Interest Entity. U.S. investors would only have an interest in an offshore firm with contractual rights to the firm’s operational results but would not own the underlying assets.

This is a legal gray area that brings the risk of management changing the terms of the contractual agreement or the Chinese government altering the legality of such arrangements. Prospective U.S. investors in the IPO would need to factor in this important structural uncertainty.

As to valuation, management is asking IPO investors to pay an EV / Revenue multiple of nearly 25x for modest topline revenue growth in absolute terms.

While the firm is profitable, its scale is small, the IPO has several non-standard aspects, is quite highly valued and has only a 9 percent share float, which makes it susceptible to high volatility.

If the IPO occurs, I expect to sit it out and watch the stock price action in the open market. Perhaps a lower entry point will present itself post-IPO.

Topics:ANALYSIS: Asia Times U.S. IPO Is Richly Valued
READ MORE
COMMENTS0 comments
Sign in
We reserve the right to remove any content at any time from this Community, including without limitation if it violates the Community Standards.
SUBSCRIBERS ONLY
MOST READ
LATEST NEWS
HOME
CHINA STOCKS
U.S. STOCKS
COMMENTARY
INVESTOR RELATIONS
INVESTIGATIVE RESEARCH REPORT
ABOUT US