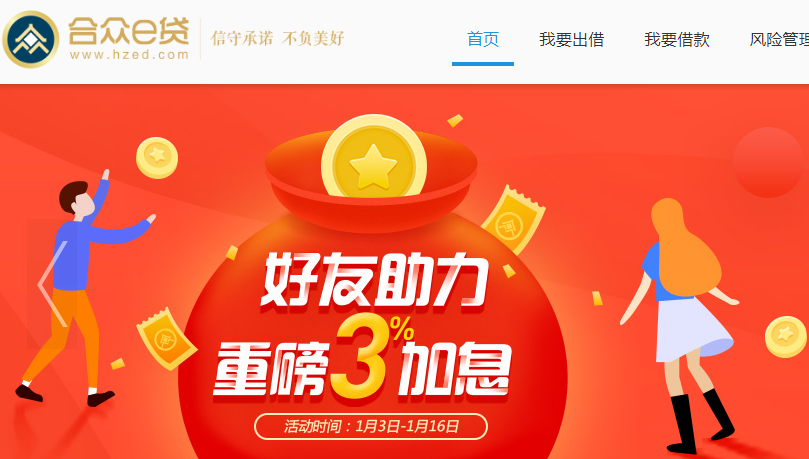 Another peer-to-peer lending marketplace, HeZhong International (Holding) Ltd., is seeking a boost in the eyes of Chinese borrowers and investors by becoming a publicly traded company on the Nasdaq Capital Market.

The Shenzhen company hopes to raise up to $5.8 million in New York under the symbol “HZ,” according to its prospectus filed with the U.S. Securities and Exchange Commission.

On its online platform, HeZhong matches borrowers and investors, facilitating mostly consumer loans ranging from $437 to $2,200. It also issues car loans in the amounts ranging between $2,900 and $29,200.

“We strive to make credit decisions for consumer loans within four hours and for automobile loans within two days after receipt of all required documents,” the company said about its streamlined loan application process.

As of June 30, it said it had attracted nearly 6 million users since it inception in 2017 through channels including social media WeChat, financing platform Rong360.com Inc., and ZDX for automobile loan borrowers. Of those, more than 81,000 investors and 637,500 borrowers have participated in loan transactions.

For the year ended in June, HeZhong said its revenue soared to $34.4 million compared with $1 million through June 2017 after launching its consumer financing in April 2017. Net income through June 2018 was $4.3 million in contrast to a loss of $840,000 for the preceding fiscal year.

In its filing, the company said it intended to use the proceeds of its offering “to increase our capitalization and financial flexibility, create a public market for our shares, retain talented employees by providing them with equity incentives and enable access to the public equity markets for us and our shareholders.” It added that a quarter of the capital would fund sales and marketing, which includes developing internet traffic and forming business partnerships. Other portions would go toward its product offerings, international expansion, and general corporate purposes.

After the offering, the founder and chairman of HeZhong, Zhaobin Wen, will own the majority of the voting power in the company.

ViewTrade Securities Inc. was listed as the underwriter on the deal.