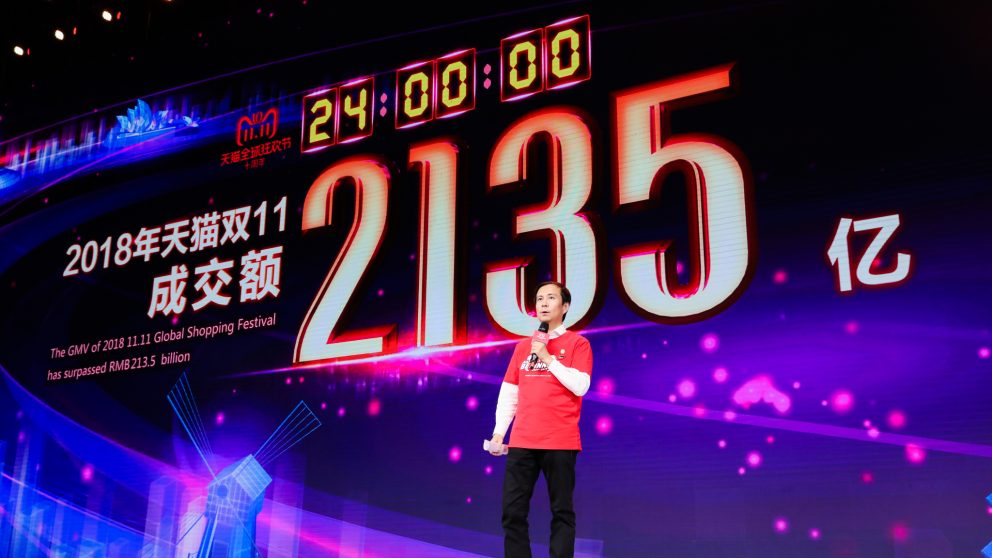 “As 11.11 wore on, milestones from the previous 10 years fell, one by one. Just after 4:00 p.m., it was a foregone conclusion that this year would be the biggest 11.11 ever – something Alibaba Group executives had promised heading into the shopping festival,” the e-commerce giant said in a statement on its website, Alizila, after midnight in China.

The 24-hour shopping rush over the weekend, which Alibaba called “global” with participating international brands, has dwarfed the figures of any U.S. shopping day. The biggest American retailer Amazon’s (Nasdaq: AMZN) was estimated to drive $4 billion in revenue on Prime Day in July this year, while Black Friday and Cyber Monday of 2017 together reached sales of $19.62 billion, according to CNBC.

Singles’ Day, originally popularized as a day for China’s singles to buy gifts for themselves, in its tenth year scored sales of $1 billion within one and a half minutes, CNBC reported regarding this weekend.

The Chinese conglomerate, which operates lines of businesses across sectors including film production, artificial intelligence, cloud computing, finance, and logistics, has pushed its lines of commerce this year, promoting sales both online and in its physical stores. Around 200,000 smart stores have joined the Nov. 11 festival, according to a statement by Alibaba’s CEO, Daniel Zhang.

Singapore’s Lazada, an e-commerce platform covering Southeast Asia that is majority-owned by Alibaba, contributed to the sales, hosting its own single-day shopping festival.

In addition, as a new feature this year, Alibaba brought Starbucks (Nasdaq: SBUX) onboard to participate in its festival. The giant’s food delivery unit, Ele.me, delivered Starbucks across 11 cities in China on a partnership with the Seattle café chain struck in August.

Alibaba’s executive vice chairman, Joe Tsai, said in yesterday’s report on Alizila that the rise of the Chinese middle class “is not going to stop, trade war or no trade war.” He said middle-class consumers are stepping up purchases of fast-moving consumer goods despite a slowdown in Chinese economic growth.

The trade tensions with the United States, however, as well as Beijing’s tighter regulation on advertising and online finance, have been weighing on Alibaba’s share price for some time.

China’s shoppers have been spooked this year by falling stock markets, a protracted trade war, and wider economic malaise. Earlier this month, Alibaba has lowered its full-year sales forecast after its core commerce business saw its slowest quarterly sales growth since 2016.

The stock of Alibaba was trading at $141.56 per American depositary share before noon Monday, down more than 2 percent.