The stock of the unicorn Pinduoduo Inc. (Nasdaq: PDD) soared more than 40 percent Thursday as it lifted off with fanfare and raised $1.6 billion in one of the largest initial public offerings in New York by Chinese companies in four years.

Pinduoduo, a three-year-old social discounter platform became a publicly traded company just before noon today as it sold 85.6 million American depositary shares at $19 apiece, at the top of the expected range.

Welcome Pinduoduo 拼多多 ! We’re excited to have you ringing the Nasdaq Opening Bell all the way in #Shanghai, #China in honor of your IPO! #PDDIPO #PinduoduoIPO pic.twitter.com/5iHhif890b 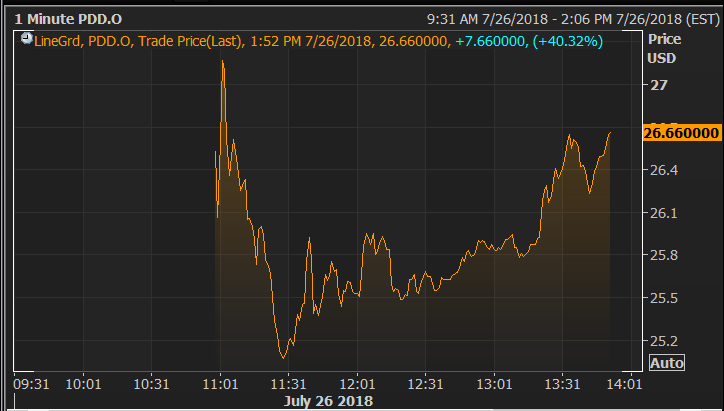 In its pre-IPO period, Pinduoduo briefly raised its offering price to $22.8 per ADS after its stock sale was oversubscribed 20-fold, according to local media. The 20 percent increase in pricing would have raised the valuation of the Facebook-Groupon mashup to $28.8 billion.

In the company's prospectus, Huang said the company strives to combine the principles of "Costco" and "Disneyland," bringing together value-for-money and entertainment, through a decentralized network and social interaction.

The company is backed by Chinese tech giant Tencent Holdings Ltd., which acted as one of the cornerstone investors in the IPO, committing $250 million.

Pinduoduo said it plans to use the proceeds from the IPO to expand its business operations, for research and development, and general purposes.