Another Makeover for Future FinTech Briefly Raises Its Stock

The stock of the company, previously known as SkyPeople Fruit Juice, jumped 27 percent in early trading, then retreated to $2.24 per ADS in the afternoon. 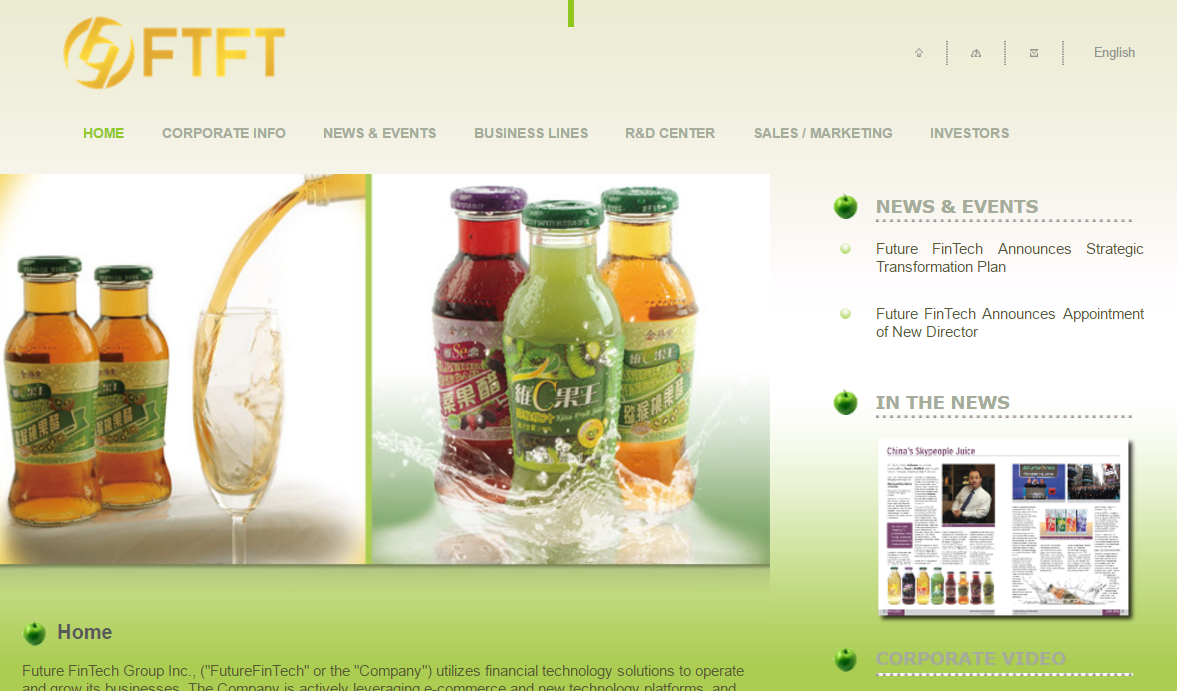 Future FinTech Group Inc. (NASDAQ: FTFT) announced today that it is expanding its blockchain business to include digital asset system operations and a digital asset application incubator and accelerator.

The stock of the company, based in Xi'an, China, spiked 27 percent in early trading, then retreated to $2.24 per American depositary share, up 4 percent, intraday on Friday.

The company, formerly named SkyPeople Fruit Juice Inc., delved into blockchain technology last year and began to develop applications and digital asset systems for financial and retail businesses. Since the change, Future FinTech has invested heavily into the blockchain industry, buying a controlling stake in a blockchain city project, Nova Realm City, as well as in DCON, a cryptocurrency application developer. DCON, launched in October, had over 200,000 registrants last month and more than 300,000 users in instant messaging platforms QQ, WeChat, and Telegram, according to Kkoin.com.

In today's announcement, Future FinTech effectively announced another makeover: it would change its business strategy and shift its source of revenue to the blockchain-based global e-commerce, as well as financial and management consulting.

The chairman and chief executive officer of Future FinTech, Yongke Xue, said in a statement today that the company planned to create a new digital asset application incubator, "Chain World – Digital Space," that would generate rent and service fees. Its operations would span across "business incubation and acceleration services including projects finance, technology, talent, and marketing services for up-and-coming blockchain companies," Xue said.

The stock of Future FinTech has been falling steadily throughout its trading history. While shifting gears from selling fruit juice to developing blockchain applications. the company's shares briefly rose on Wall Street, but as the news of its blockchain acquisitions elapse, the shares have continued their slide. In the first quarter, the company reported $562,146 in revenue primarily from its legacy beverage product operations. For the same period last year, the company reported revenue of nearly $3 million. In 5 years of trading, the stock of the company fell from approximately $20 per ADS.

Shares of Future FinTech spiked 27 percent in early trading today on news of its business plan change, but retreated to $2.24 per share in the afternoon, up 4 percent.