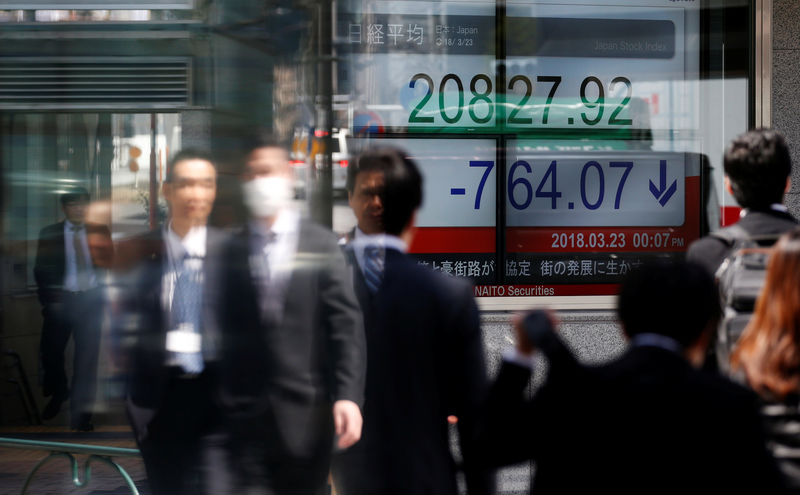 LONDON (Reuters) - Caught between the world's superpowers as they butt heads over trade and the risk of conflict in Syria, the global economy is starting to show some bruises.

While it is still on track for its best growth in several years - and talk of all-out trade war between the United States and China has cooled in recent days - investors increasingly think some damage has been done.

"The trade conflict between the U.S. and China will not leave the global economy unscathed even though both sides have now attempted to ease the tensions," Joerg Kraemer, chief economist at German bank Commerzbank, wrote in a note.

As a result, Commerzbank said on Friday it had cut its growth forecasts for the United States, China and the export-based German economy for the first time in a long while.

Economic data in the euro zone has started to disappoint after a stellar end to 2017. Earlier this month, weak household spending data raised doubt about Japan's ability to ride out a potential trade war.

While the World Trade Organization on Thursday forecast a robust recovery in global trade, it warned this could falter if tensions escalate further.

The International Monetary Fund and World Bank are likely to repeat that message at a summit in Washington, D.C., next week - but there is little sign that the political shadow cast over the world economy is likely to lift soon.

Firstly, there remains the risk of a Western missile strike on Syria that could lead to confrontation with Russia.

And there could be more trouble when Japanese Prime Minister Shinzo Abe travels to Florida to meet President Donald Trump on Tuesday and Wednesday. Earlier this week Trump tweeted that Japan had "hit us hard on trade for years!"

Data from Japan due at the same time are likely to show its exports rose for a 16th month running - potentially grist to the mill for Trump's gripes.

Investors will be braced for any sign of a protectionist approach towards Japan. "It is a risk," said Akihiro Morishige, senior researcher at Mitsubishi Research Institute. "The financial markets could become volatile if things get intense." A couple of closely watched indicators are likely to shed light on how the frenzied geopolitics of recent weeks have started to affect the real economy.

Economists polled by Reuters reckon another fall in the ZEW is on the way this month. Similarly, euro zone consumer confidence is likely to decline for a fourth month running.

The Citi Economic Surprise Indicator for the euro zone - a gauge of whether data routinely beats or undercuts the market expectation - is now running at its lowest level in nearly a year.

Nonetheless, economists still think the euro zone economy is on track for solid growth this quarter and next - at least better than in Britain, which has struggled for momentum over the last year.

The Bank of England is concerned about price pressures in Britain's economy and it looks likely to raise interest rates in May - although weaker-than-expected wages and inflation data in the coming weak could dent that prospect.

Economic growth figures from China and industrial and retail sales data in the United States will also be scrutinised as barometers of global economic health in the coming week.